When it Lived : Late Cretaceous, 75-68 million years ago

Tarchia (meaning “brainy one”) is a genus that includes herbivorous dinosaurs from early Cretaceous in Mongolia. 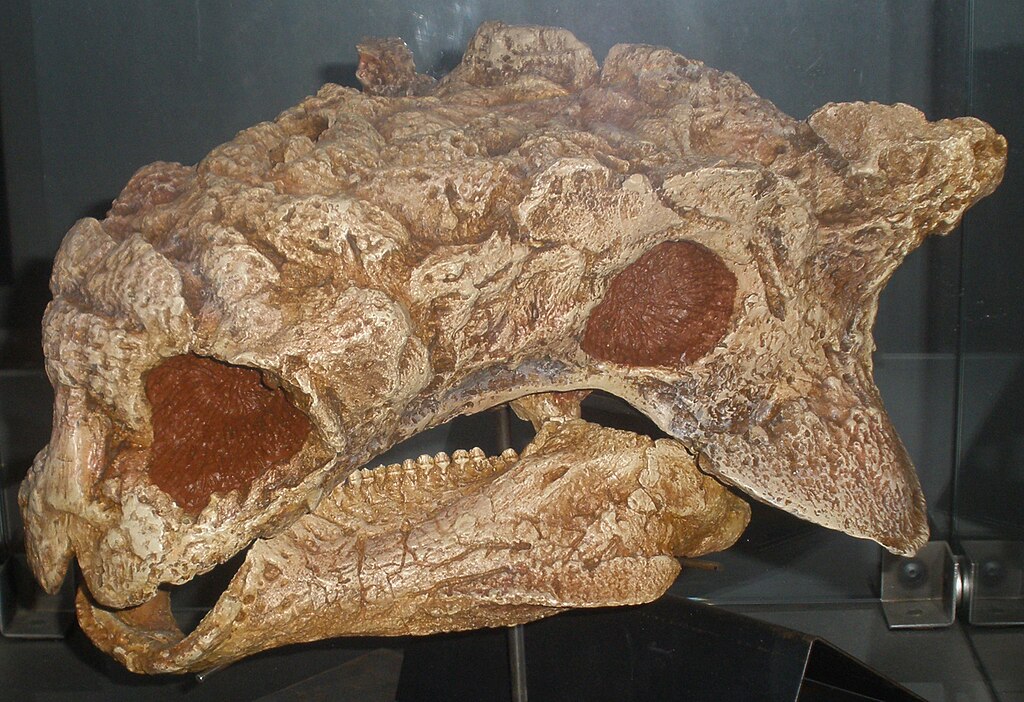 In the year 1970, a Polish-Mongolian expedition found an ankylosaurian skull close to Khulsan. The skull was discovered in 1977. Teresa Maryanska named and identified the species of type Tarchia kielanae. The generic name derives of Mongolian the word tarkhi meaning “brain” and Latin ia, referring to a size of the brain that is believed to be to be larger than that of the closely related species Saichania. The name is a tribute to the professor Zofia Kielan-Jaworowska who was the chief of the expedition.

The holotype, ZPal MgD-I/111, was discovered in the Upper Cretaceous (possibly Campanian-Maastrichtian) Barun Goyot Formation (previously known as the ‘Lower Nemegt Beds’) of the Nemegt Basin of Mongolia. It is comprised of the skull’s roof as well as a braincase and the skull components in the rear. Maryanska has referred to three other examples: ZPAL MgDI/43, a massive postcranial skeleton that contains 3 “free” tail vertebrae, twelve tail vertebrae from what is known as the “handle” of the tail club, and a scute ZPAL MgDI/49, which is a right humerus as well as PIN 3142/251 A skull-shaped skeleton but is unidentified.

Tarchia is the youngest geologically of all the known Asian Ankylosaurid dinosaurs. The year 1977 saw Tatyana Tumanova gave a name to a different species, Tarchia gigantea. This was a renaming for Dyoplosaurus giganteus Maleev 1956 that was taken from specimen PIN 5511/29. The year 1987 was when Tumanova found that the two species are the same. This will mean that Dyoplosaurus giganteus the most important synonym for Tarchia kielanae. The term was accepted by the general public and Tarchia gigantea was accepted as the common species name, as a combination that replaced Tarchia kielanae. However, recent study by Victoria Megan Arbour indicates that D. giganteus is indistinguishable from other ankylosaurs from the late Campanian-Maastrichtian of Mongolia, and hence a nomen dubium; the study revived the name Tarchia kielanae. A rump with a tail and a club sample ZPAL MgD I/113 that was once called Dyoplosaurus giganteus, and later to Tarchia gigantea, was later by Arbour as distinct than it being a D. giganteus Holotype. The study conducted by Arbour concluded that the specimen PIN 3142/250, which was in 1977, was referred to Tarchia by Tumanova was likely to be from Saichania, rather. This would drastically alter the perception of Tarchia since this specimen had been the best preserved and the majority of illustrations or museum mounts as well as research were built on it. Arbour observed that the Holotype of Tarchia had distinct characteristics with the one of Minotaurasaurus Miles and Miles 2009 and concluded that the latter was an intermediate synonym for Tarchia.

In 2016 a study carried out by Penkalski & Tumanova indicated that PIN 3142/250 cannot be attributed to Saichania due to the significant anatomical differences. Instead, it is a completely distinct species in Tarchia, T. teresae. The study also identified Minotaurasaurus as an individual species within the genus.

Are dinosaurs hunted in packs ?