When it Lived : Early Jurassic, 205 million years ago

Heterodontosaurus, a genus comprising heterodontosaurid dinosaurs, was alive during the Early Jurassic 200-190 Million years ago. Based on a South African skull, Heterodontosaurus Tuckeri, the only member species of this genus, was named in 1962. Named after the genus, it means “different-toothed lizard”, referring to the unusual heterodont dentition. The specific name is in honour of G. C. Tuck who supported the discovery. More specimens were found over time, including a complete skeleton that was discovered in 1966. 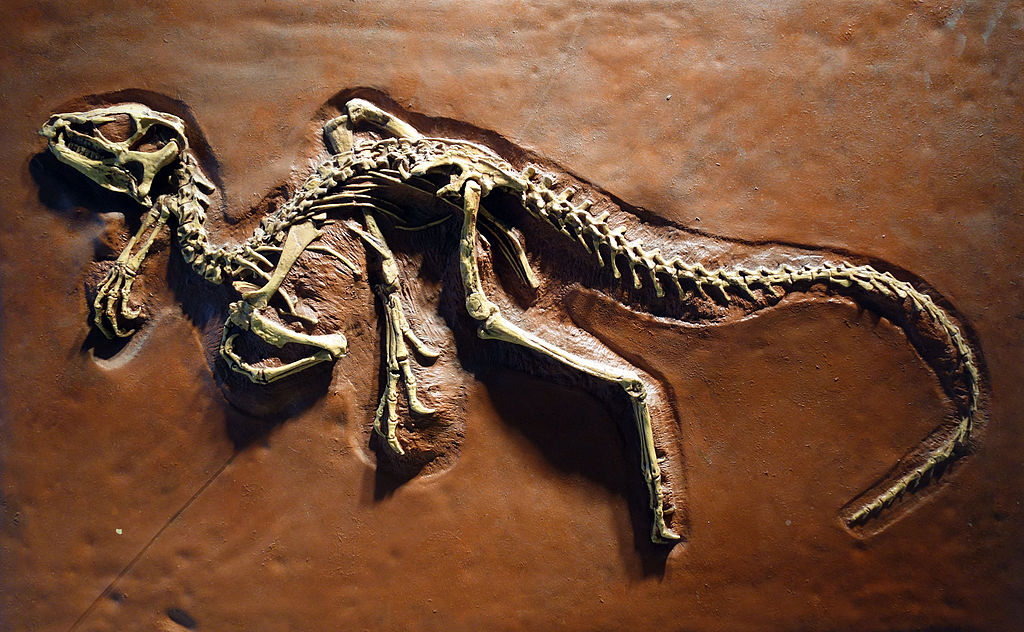 Heterodontosaurus, despite being a small dinosaur was the largest member of its family. It measured between 1.18 m (3 feet 10 in) and 1.75 m (5ft 9in) in length and weighed between 2 and 10 kilograms (4.4 and 22.0lb). When viewed from the side, the skull was triangular, long, narrow and elongated. The horny beak covered the front of the jaws. There were three types of teeth in it. In the upper jaw, there were small, incisor-like, teeth followed by canine-like, long tusks. The chisel-like cheek teeth were separated by a gap. The body had a short tail and a short body. The forelimbs of the five-fingered lion were strong and long. However, the hind-limbs were short and slender and had four toes.

The holotype Heterodontosaurus tucki specimen (SAMPK-K337) was found during the British-South African expedition in South Africa and Basutoland (formerly Lesotho). It is now housed at the Iziko South African museum. It was found at Tyinindini in Transkei, a district in South Africa’s Cape Province. The skull is almost complete, but the specimen is a fragment of a broken skull. It was not possible to locate any postcranial remains that were mentioned in the original description. Alfred Walter Crompton, palaeontologists, and Alan J. Charig named the animal in 1962. The name genus refers to the distinctive-shaped teeth. The specific name is in honor of George C. Tuck who was a director at Austin Motor Company and supported the expedition. Although the specimen was incompletely prepared at the time of publication the authors only described the lower jaw and front of the skull. This was a significant discovery as very few ornithischian dinosaurs existed at that time. Preparation of the specimen (i.e. The removal of the bones from their rock matrix was a time-consuming process. They were covered with a ferruginous layer that contained haematite. This was impossible to remove with a diamond saw as it could cause severe damage to the specimen.

1966 saw the discovery of a second Heterodontosaurus specimen (SAMPK-K1332) at Voyizane, in the Elliot Formation, Stormberg Group rock formations, 1,770m (5,807ft) above the sea level, on Krommespruit Mountain. The skull and skeleton were preserved in articulation (i.e. The bones were preserved in their original positions in relation to one another, with very little displacement or distortion. Albert Santa Luca and Crompton, palaeontologists, briefly described the postcranial skeleton in 1976. The specimen’s forelimb bones were previously discussed by Robert T. Bakker and Peter Galton in 1974. This article was important in establishing that Dinosauria is a monophyletic natural order. However, most scientists of the time, including those who had described Heterodontosaurus in 1973, believed that the main orders Saurischia, Ornithischia, were not related. 1980 was the first complete description of the skeleton. SAM-PK-1332 is the complete heterodontosaurid skeleton. Although a detailed description of Heterodontosaurus’ skull was promised for a long time, it was not published after Charig’s death in 1997. The skull was finally described by David B. Norman, palaeontologist, and his colleagues in 2011.

The frontal part of a juvenile skull, a fragmentary maxilla, and a left maxilla were all collected at Voyizane during expeditions between 1966-1967. However, the first specimen was only recognized as belonging to this genus in 2008. Until 2011, a partial snout (NMQ 1788) was found on Tushielaw Farm, south of Voyizane in 1975. It was originally thought to be Massospondylus. Robert Broom, a paleontologist, discovered a partial skull in South Africa’s Clarens Formation. It was later sold to the American Museum of Natural History as part of a collection almost entirely of synapsids fossils in 1913. Sereno first identified this specimen as belonging to a subadult Heterodontosaurus (AMNH 24000), and published it in a 2012 monograph on the Heterodontosauridae. This was the first comprehensive review article on the family. The review also identified a Voyizane partial postcranial skeleton as Heterodontosaurus (SAMPK-K1328). Galton suggested that it could belong to the related species Pegomastax in 2014. Sereno named the specimen based on a partial skull found at the same location. A new Heterodontosaurus (AM 4766), was discovered in 2005 in an Eastern Cape Province streambed. It was extremely complete but the rocks surrounding it were too difficult to remove. In 2016, the European Synchrotron Radiation Facility scanned the specimen to reveal its skeleton and help in researching its lifestyle. Some of these findings were published in 2021.

Richard A. Thulborn, palaeontologist, suggested that Heterodontosaurus could be a junior synonym for the genus Lycorhinus. This was also named in 1924 with the specie L. angustidens. It was also derived from a South African specimen. The type species was reclassified as a member the older genus as the new combination Lycorhinus.tucki. He considered it distinct because of slight differences in its teeth, and its stratigraphy. After criticisms of the 1973 synonymy by Galton, he reiterated his claim in 1974 when he described Lycorhinus consors as a third Lycorhinus species. Charig and Crompton in 1974 agreed that Lycorhinus and Heterodontosaurus belonged to the same family, Heterodontosauridae. However, they disagreed that their similarities were sufficient to be considered congeneric. They pointed out that Lycorhinus angustidens holotype specimen of Lycorhinus was not preserved well and it was difficult to compare it to H. tucki. Despite the controversy, neither side had ever examined the L. Angustidens Holotype specimen firsthand. However, James A. Hopson, Palaeontologist, also supported generic separation of Heterodontosaurus, in 1975. He moved L. consors into its own genus Abrictosaurus.

Heterodontosaurus is a small dinosaur. SAM-PKK1332, the most complete skeleton, belonged to an animal that measured 1.18 m (3 ft 10 inches) in length. In separate studies, its weight was varyingly determined at 1.8 kg (4.0 lb), 2.59kg (5.7 lb), and 3.4 kg (7.5 lb). The closure of the vertebral sutures on its skeleton suggests that it was an adult and likely fully grown. The second specimen, which is incompletely skeletonized, suggests that Heterodontosaurus may have grown significantly larger. It reached a length of 1.75m (5 ft 9in) and a weight of almost 10 kg (22lb). It is not clear why the sizes of the two specimens differ. This could be due to variability within one species, sexual dimorphism or the existence of two distinct species. This dinosaur was about the same size as a turkey. Heterodontosaurus is one of the largest members of the Heterodontosauridae family. This family includes some of the smallest ornithischian dinosaurs known – for example, the North American Fruitadens reached only 65-75 cm (26- to 30 in) length.

After the 2009 description of the Tianyulong, which had hundreds of filamentous integuments from neck to tail and was preserved in a long, filamentous form, Heterodontosaurus was also depicted with such structures in publications by the palaeontologists Gregory S. Paul, and Paul Sereno. Sereno stated that heterodontosaurs may have looked similar to a two-legged, agile porcupine in real life. Sereno published a restoration that included a display structure on the snout above the nasal fossa.