When it Lived : Late Cretaceous, 80-73 million years ago

Gorgosaurus (//,go:rg@’so:r@s/GOR-g@–@s; meaning “dreadful Lizard”) is a genus tyrannosaurid dinosaurs that lived in western North America during Late Cretaceous Period (Campanian), which was between 76.6 and 75.1 millions years ago. Fossil remains were found in Canada’s province of Alberta, and possibly in the U.S state of Montana. While only G. libratus is the type species that paleontologists recognize, other species have been incorrectly referred to as the genus. 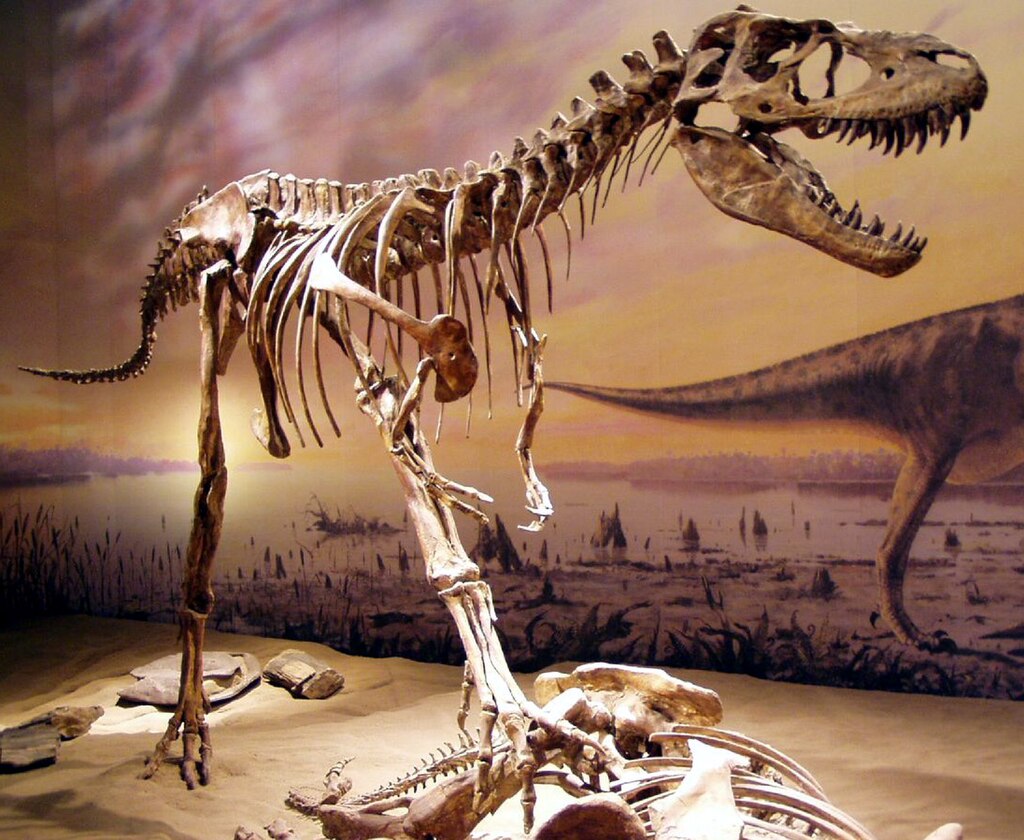 Gorgosaurus, like most tyrannosaurids was a bipedal predator that weighed more than two metric tonnes as an adult. It had dozens of sharp, large teeth, and its forelimbs with two fingers were relatively small. Gorgosaurus was closely related to Albertosaurus and distantly related with the larger Tyrannosaurus. Albertosaurus and Gorgosaurus are very similar. The only difference is in the skull bones and teeth. G. libratus is considered to be a species in the Albertosaurus family. This would make Gorgosaurus a junior synonym.

Gorgosaurus lived in lush floodplains at the edge of an inland ocean. It was an apex predator that preyed upon many ceratopsids, hadrosaurs and other aquatic creatures. Gorgosaurus was sometimes found alongside Daspletosaurus therosus in some parts of the country. Despite being roughly equal in size, evidence suggests that the two species were niche differentiated. The best-recognized tyrannosaurid from the fossil record is Gorgosaurus, which has been found in dozens of specimens. Scientists have been able to study its biology through the many remains.

Lawrence Lambe first described Gorgosaurus Libritus in 1914. Named after the Greek gorgos/gorgos (fierce or terrifying) and sauros/saurus (lizard), G. libratus is the type species. The specific epithet “balanced”, which is the past participle in the Latin verb, librare, means “to balance”.

Charles M. Sternberg discovered the holotype Gorgosaurus (NMC 2120), a nearly complete skull and skeleton that was associated with it in 1913. This was the first complete hand-formed tyrannosaurid to be discovered. It was discovered in Alberta’s Dinosaur Park Formation and is now housed at the Canadian Museum of Nature in Ottawa. Prospectors from New York City’s American Museum of Natural History collected hundreds of amazing dinosaur specimens along the Red Deer River, Alberta. Matthew and Brown recorded four of these specimens back in 1923.

Matthew and Brown also described the fifth skeleton (AMNH5664), which Charles H. Sternberg collected in 1917 and sold as a gift to their museum. It was smaller than other Gorgosaurus specimens and had a lighter skull and elongated limb proportions. This specimen also had many sutures that were not fused between bones. Matthew and Brown pointed out that these features are typical of juvenile tyrannosaurids. However, they still considered it to be the holotype for a new species, G. Sternbergi. This specimen is considered a juvenile G.libratus by paleontologists today. Many other specimens from the Dinosaur Park Formation have been found and are now housed in museums throughout the United States and Canada. G. libratus, the most well-known tyrannosaurid from the fossil record, is known from almost every growth series.

Joseph Leidy, a Montanan tyrannosaurid dentist, described two premaxillary tyrannosaurid teeth in 1856. Leidy named them Deinodon, despite not knowing the exact appearance of the animal. Matthew and Brown noted in 1922 that the teeth could be distinguished from Gorgosaurus’s. However, in the absence of skeletal remains, they decided not to unambiguously synonymize the two genera. They named the?Deinodon.libratus. While Deinodon teeth look very similar to Gorgosaurus’s, the tyrannosaurid tooth structure is extremely uniform so it is impossible to determine which animal they belong to. Today, Deinodon is often referred to as a nomen Dubium. Other synonyms for G. libratus/or D. horribleidus are Laelaps falculus (or Laelaps hazenianus), Dryptosaurus incrassatus (or Dryptosaurus penabekides), and Laelaps hazenianus (or Laelaps horridus).

Several tyrannosaurid skeletons found in Montana’s Two Medicine Formation, Judith River Formation, and TCMI 2001.89.1 are thought to belong to Gorgosaurus. However it is not known if they belong to G. libratus. One specimen from Montana (TCMI2001.89.1) is housed at the Children’s Museum of Indianapolis and shows evidence of severe pathologies. It includes a healed leg, rib and vertebra fracture, osteomyelitis (infection), and a permanent tooth loss.

In the 20th century, several species were wrongly assigned to Gorgosaurus. Charles Whitney Gilmore named Gorgosaurus lencensis in 1946 a complete skull of a small tyrannosaurid, CMNH 7541, which was found in Montana’s Hell Creek Formation, which is younger and more Maastrichtian-age. Bob Bakker and his colleagues renamed this specimen Nanotyrannus in 1988. Many paleontologists consider Nanotyrannus to be a juvenile Tyrannosaurus Rex. Evgeny Malev also created the names Gorgosaurus Lancinator or Gorgosaurus Novojilovi to describe two small tyrannosaurids (PIN 552-2 and PIN 553-1) found in the Nemegt Formation of Mongolia. Kenneth Carpenter changed the name of Maleevosaurus Novojilovi, a smaller specimen from Tarbosaurus bataar.