Gallimimus (//,gaelI’maIm@s/GAL-i-MY@s) is an genus of theropod dinosaurs that lived in Mongolia during the Late Cretaceous period. It is approximately seventy-million years ago (mya). Polish-Mongolian expeditions to the Gobi Desert in Mongolia in the 1960s discovered several fossils at various stages of growth. A large skeleton found in this area was named the holotype specimen for the new genus Gallimimus bullatus in 2002. Its generic name is “chicken mimic”, and refers to the similarities between its neck vertebrae, and those of the Galliformes. Bulla, a Roman youth’s gold capsule, is the source of the specific name. It refers to the bulbous structure at Gallimimus’ skull base. The fossils of Gallimimus were the most complete and well-preserved ornithomimid (“ostrich dinosaurian”) material ever discovered. This genus is still one of the most widely known of the group. 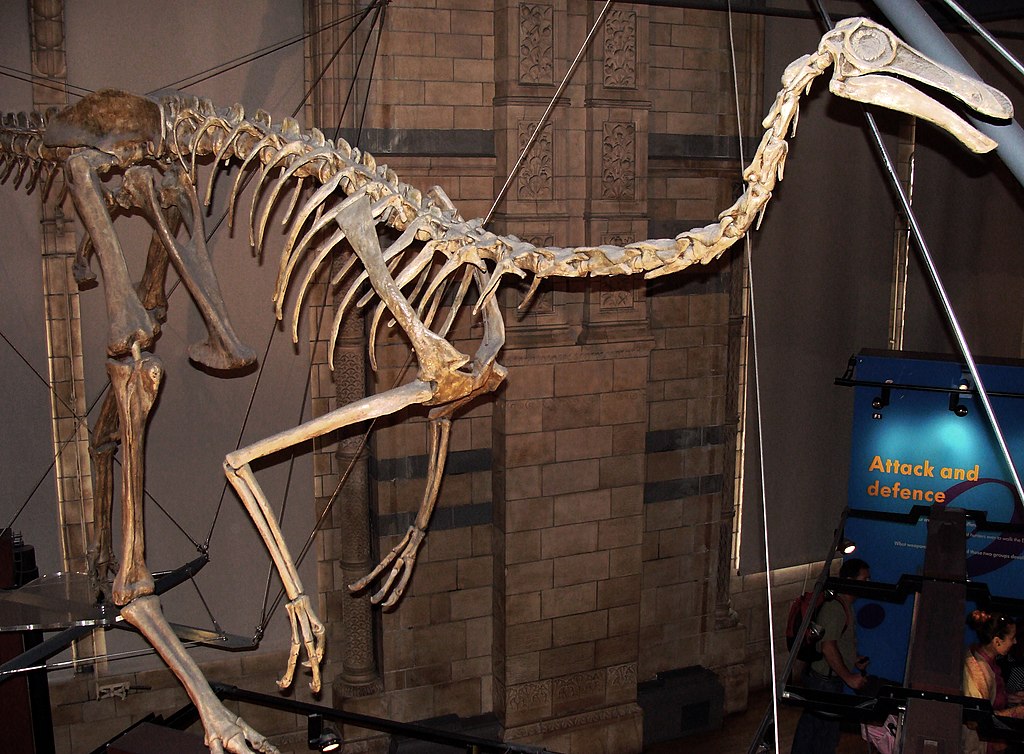 Gallimimus, the largest ornithomimid known, was 6m (20ft) in length and 1.9m (6ft 3in) high at the hip. It weighed approximately 440 kg (970 lb). It would have been feathered, as evidenced by Ornithomimus. It had a small head and large, light eyes that were oriented to the sides. Although the snout was longer than other ornithomimids it was more round at the tip. Gallimimus had a toothless, keratinous (horny), beak and a delicate lower jaw. Many vertebrae showed signs of being pneumatic (air-filled) with their openings. The length of the neck was proportional to that of its trunk. The hands were proportionally shorter than any other ornithomimosaur. Each had three fingers with curved claws and had three digits. The hindlimbs were longer but the forelimbs were shorter. The Ornithomimosauria group includes the Ornithomimidae family. Anserimimus, also from Mongolia is believed to be Gallimimus’ closest relative.

Gallimimus, an ornithomimid would have been a fast animal. It could escape predators by using its speed; it was estimated to be between 42 and 56 km/h (29 and 34 mph). It could have been able to see and had intelligence similar to that of ratites birds. Based on the discovery in a bone bed of multiple Gallimimus specimens, it is possible that Gallimimus lived in groups. There are many theories about the diet of Gallimimus, and other ornithomimids. It may have used its mobile neck to locate small prey items on the ground. However, it could also have been an omnivore opportunist. Although it has been suggested that the animal used small, columnar structures in its mouth to filter water, these structures could have been ridges for eating tough plant material. This would indicate a herbivorous diet. Gallimimus is the most common ornithomimosaur found in the Nemegt Formation. It lived with its relatives Anserimimus, Deinocheirus and others. Gallimimus was featured as a character in Jurassic Park. This scene was significant in the history of special effects and helped to shape the popular conception of dinosaurs being bird-like.

Based on fossils from the related Ornithomimus it is clear that Ornithomimosaurs (“ostrich dinosaurs”) had feathered bodies. The adults also had wing-like structures, as shown by the presence quill-knobs in the ulna bone, which are bumps that indicate where feathers would have been attached.

Between 1963 and 1965, both the Polish Academy of Sciences (Poland) and the Mongolian Academy of Sciences (Mongolia) organized the Polish-Mongolian Palaeontological Expeditions to the Gobi Desert of Mongolia. Numerous ornithomimids were found in the Nemegt Basin’s sand bed. They lived at various stages of their growth from the Nemegt and Tsaagan Khushuu, Altan Ula IV, and Naran Bulak locations. The collection included three partially complete skeletons and two skull-equipped skeletons. There were also many fragmentary remains. Zofia Jaworowska, palaeontologist, discovered the largest skeleton in Tsaagan Khushuu. It was lying on its back and had the skull under its pelvis. A small specimen was also discovered in Tsagan Khushuu that year. Another small specimen was also found at the Nemegt location. The 1967 Mongolian Palaeontological Expedition in BugeenTsav, outside the Nemegt Basin, discovered a small skeleton that was missing forelimbs. The fossils were kept at the USSR Academy of Sciences, Poland and Mongolian. Some of the first female scientists to name new dinosaurs were part of the Polish-Mongolian expeditions. These fossils shed light on the inter-species fauna exchange between Asia and North America in the Cretaceous period. In 1968, some of the skeletons were displayed in Warsaw, in semi-erect, tall positions. However, today, more horizontal poses are preferred.

Ewa Roniewicz, Halszka Ozmolska and Rinchen Barsbold, paleontologists, named the new genus Gallimimus bullatus in 1972. They used the largest-collected skeleton specimen IGM 100/11 (from Tsagan Khushuu, previously referred to as G.I.No.DPS100/11 and MPD 100/11), for the holotype. The Latin gallus, meaning “chicken”, and the Greek mimos “mic”, refers to the front portion of the neck vertebrae that resembled the Galliformes. The Latin bulla is a gold capsule worn around the neck by Roman youth. It refers to the bulbous capsule at the base the dinosaur’s skull. This unusual feature was not found in other reptiles. The holotype is a nearly complete skeleton that includes a distorted nose, incomplete lower jaw, vertebral sequence, pelvis, and some missing hand-foot bones.

Other partially complete skeletons included juveniles. ZPALMgDI/1 (from Tsagan Khushuu), has a fractured skull with a missing tip and damaged vertebrae. ZPALMgDI/94 (from Nemegt) does not have the skull, atlas or tip of the tail. IGM100/10 (from Bugeen Tsav) does not have a pectoralgirdle, forelimbs, several vertebrae and even ribs. Osmolska and his colleagues identified 25 specimens, of which nine were missing single bones.

The fossils of Gallimimus were the best preserved ornithomimid material at the time they were discovered. This genus is still one of the most well-known members of the group. Ornithomimids had been mainly known from North America. Archaeornithomimus was the only known member from Asia. More specimens were discovered by international expeditions led by Mongolians since the initial discoveries. Three Gallimimus skeletons, including the holotype, were later part of a traveling exhibit of Mongolian dinosaur fossils that toured different countries.

Fossil poaching is a major problem in Mongolia today. Numerous Gallimimus specimens were looted. Hang-Jae Lee, along with colleagues, reported that a fossil trackway was discovered in 2009 and associated with a gallimimus foot (specimen MPC-D100F/17). The remaining skeleton was removed by poachers along with several other Gallimimus specimens. This is evident by the absence of excavation pits and garbage as well as scattered broken bones found in the quarry. It is not common to find tracks that are closely related to body fossils. Some tracks correspond with ornithomimid feet while others belong to other dinosaurs. After being smuggled to America, a slab containing two Gallimimus specimens was returned to Mongolia in 2014.

Gregory S. Paul, a palaeontologist, concluded in 1988 that skulls of ornithomimids were more alike than previously believed. He moved most species into Ornithomimus genus and created O. bullatus. He changed the name to “Gallimimus (or Struthiomimus), bullatus” in 2010, but he returned to Gallimimus in 2016. Other writers have usually kept the species in their own genera. In 1988, a Japanese ornithomimid verbra was described as “Sanchusaurus”. It was later assigned to Gallimimus. Dong Zhiming, palaeontologist and colleague in 1990 suggested that Anserimimus was an uncertain species. Philip J. Currie, palaeontologist, proposed in 2000 that Anserimimus (which is only known from one Mongolian skeleton) was a junior synonym for Gallimimus. However, this was rejected by Kobayashi, Barsbold and others who pointed out many differences between the two. Barsbold noticed some morphological variations among Gallimimus specimens. However, this information has not been published. Barsbold had informally called a “Gallimimus Mongoliensis” a nearly complete skeleton in IGM 100/14. However, it differs from Gallimimus in certain details. Yoshitsugu Kbayashi and Barsbold suggested in 2006 that it likely belongs to another genus.