Daspletosaurus (/dæsˌpliːtəˈsɔːrəs/ das-PLEET-o-SAWR-əs; meaning “frightful lizard”) is a genus of tyrannosaurid dinosaur that lived in Laramidia between about 79.5 and 74 million years ago, during the Late Cretaceous Period. The genus Daspletosaurus contains two species. Fossils of the earlier type species, D. torosus, have been found in Alberta, while fossils of the later second species, D. horneri, have been found only in Montana. A possible third species, also from Alberta, awaits formal identification and another possible species D. degrootorum, also exists, but it may belong to the separate genus Thanatotheristes instead. Daspletosaurus is closely related to the much larger and more recent tyrannosaurid Tyrannosaurus rex. Like most tyrannosaurids, Daspletosaurus was a multi-tonne bipedal predator equipped with dozens of large, sharp teeth. Daspletosaurus had the small forelimbs typical of tyrannosaurids, although they were proportionately longer than in other genera. 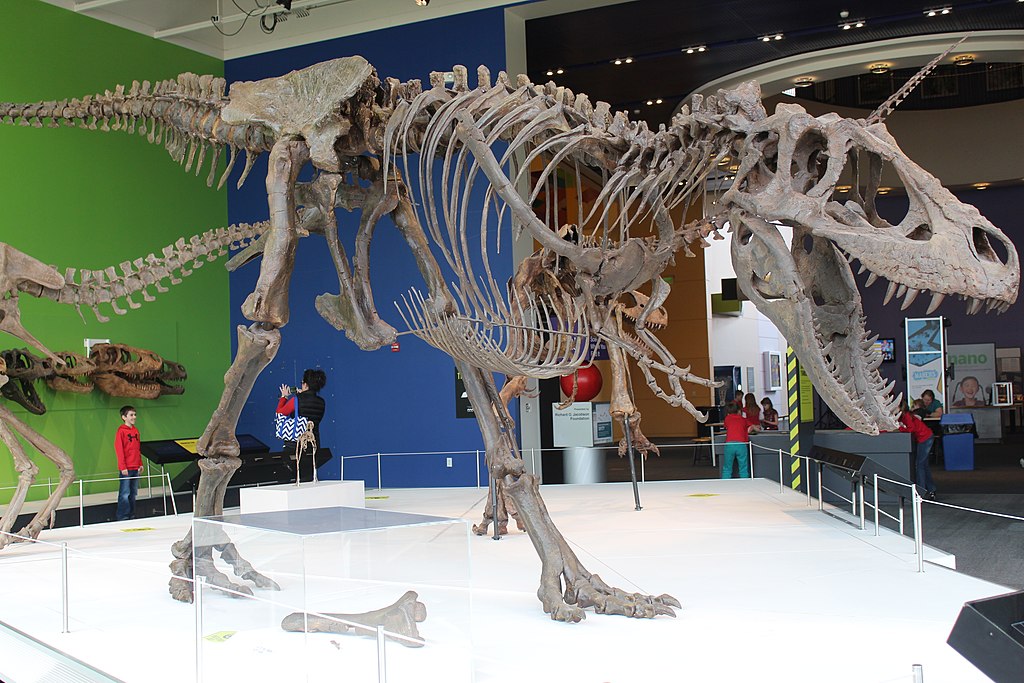 As an apex predator, Daspletosaurus was at the top of the food chain, probably preying on large dinosaurs like the ceratopsid Centrosaurus and the hadrosaur Hypacrosaurus. In some areas, Daspletosaurus coexisted with another tyrannosaurid, Gorgosaurus, though there is some evidence of niche differentiation between the two. While Daspletosaurus fossils are rarer than other tyrannosaurid fossils, the available specimens allow some analysis of the biology of these animals, including social behavior, diet and life history.

The type specimen of Daspletosaurus torosus (CMN 8506) is a partial skeleton including the skull, the shoulder, a forelimb, the pelvis, a femur and all of the vertebrae from the neck, torso and hip, as well as the first eleven tail vertebrae. It was discovered in 1921 near Steveville, Alberta, by Charles Mortram Sternberg, who thought it was a new species of Gorgosaurus. It was not until 1970 that the specimen was fully described by Dale Russell, who made it the type of a new genus, Daspletosaurus, from the Greek δασπλής (dasplēs, stem and connective vowel resulting in dasplēto-) (“frightful”) and σαυρος (sauros) (“lizard”). The type species is Daspletosaurus torosus, the specific name torosus being Latin for ‘muscular’ or ‘brawny’. Aside from the type, there is only one other well-known specimen, RTMP 2001.36.1, a relatively complete skeleton discovered in 2001. Both specimens were recovered from the Oldman Formation in the Judith River Group of Alberta. The Oldman Formation was deposited during the middle Campanian stage of the Late Cretaceous, from about 79.5 to 77 Ma (million years ago).

Dale Russell also suggested that a specimen of an immature Albertosaurus (CMN 11315) from the younger Horseshoe Canyon Formation in Alberta actually belonged to a third specimen of Daspletosaurus as D. cf. torosus, extending the temporal range of the genus by approximately 3.5 million years into the Maastrichtian. He based this referral on features of its limb and pelvic girdle, as well as the curvature of the hand claws, which he interpreted as traits matching Daspletosaurus. This reassignment was not universally accepted, and thorough re-examination of the specimen favoured its initial referral to Albertosaurus sarcophagus, despite lacking many of the diagnostic skeletal traits used to identify mature tyrannosaurids. An additional maxilla and various teeth from an Edmontosaurus-dominated bonebed in the Horseshoe Canyon Formation was also mistakenly referred to Daspletosaurus, but all the tyrannosaurid material has all since been confirmed to belong to Albertosaurus.

While very large by the standard of modern predators, Daspletosaurus was not the largest tyrannosaurid. Adults could reach a length of 8–9 meters (26–30 ft) from snout to tail. Mass estimates have centered on 2.5 metric tons (2.8 short tons), but have ranged between 1.8 and 3.8 metric tons (2.0 and 4.2 short tons).

Daspletosaurus had a massive skull that could reach more than 1 meter (3 ft 3 in) in length. The bones were heavily constructed and some, including the nasal bones on top of the snout, were fused for strength. Large fenestrae (openings) in the skull reduced its weight. An adult Daspletosaurus was armed with about six dozen teeth that were very long but oval in cross section rather than blade-like. Unlike its other teeth, those in the premaxilla at the end of the upper jaw had a D-shaped cross section, an example of heterodonty always seen in tyrannosaurids. Unique skull features included the rough outer surface of the maxilla (upper jaw bone) and the pronounced crests around the eyes on the lacrimal, postorbital, and jugal bones. The orbit (eye socket) was a tall oval, somewhere in between the circular shape seen in Gorgosaurus and the ‘keyhole’ shape of Tyrannosaurus. Split carinae (edges) have been found on Daspletosaurus teeth.

Daspletosaurus shared the same body form as other tyrannosaurids, with a short, S-shaped neck supporting the massive skull. It walked on its two thick hindlimbs, which ended in four-toed feet, although the first digit (the hallux) did not contact the ground. In contrast, the forelimbs were extremely small and bore only two digits, although Daspletosaurus had the longest forelimbs in proportion to body size of any tyrannosaurid. A long, heavy tail served as a counterweight to the head and torso, with the center of gravity over the hips.

A study of D. horneri skulls suggests that unlike many depictions of tyrannosaurids, this genus and likely other tyrannosaurids did not possess lips. Comparisons of the skull of this species with modern crocodiles show the same rugose (roughly wrinkled) bone structure that indicates the presence of large flat scales as opposed to lips. As the rough texture descends almost to the tooth line, it is theorized that Daspletosaurus’ teeth were not covered by lips, as there would have been no room for such soft tissue.