Amargasaurus (/@,ma:rg@’so:r@s(also known as “La Amarga lizard”) is a sauropod dinosaurs from early in the Early Cretaceous epoch (129.4-122.46 mya) of the present-day Argentina. The sole skeleton that is known was discovered in 1984 and is almost complete, even including an incomplete skull, which makes Amargasaurus among the most famous sauropods from its time. Amargasaurus was first discovered in 1991, and is a single species that is known to exist, Amargasaurus cazaui. It was a massive animal, however it was small for a sauropod. It measured 9-10 metres (30 or 33 feet) in length. Particularly, it had two rows of long spines running across its back and neck that were higher than those of any other sauropod known. In actuality they would have been able to have popped out of the body as separate structures supporting the keratinous sheath. Another alternative theory, currently less popular, suggests that they may form a structure that served as a support for an esthetic sail. They could be used for demonstration, battle or for defense.

Amargasaurus was found in sedimentary rocks from the La Amarga Formation, which is believed to date from the Barremian and the late Aptian stage during the Early Cretaceous. An herbivore, it lived in a shared habitat with at least three sauropod generathat could have benefited from various food sources to limit competition. Amargasaurus likely ate at a mid-heightas evidenced by the position to the inside of their ear as well as the neck’s articulation vertebrae. These indicate that it was accustomed to having its snout that was 80 centimeters (31 inches) above the ground, and an average in height 2.7 metres (8.9 feet). In the Sauropoda, Amargasaurus is classified as belonging to the family Dicraeosauridae and is distinct from other sauropods by having lower necks as well as smaller size. 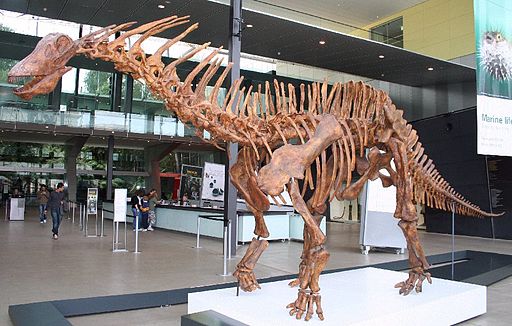 Amargasaurus was tiny for a sauropod measuring 9-10 metres (30 between 33 and 9 meters) in length and weighing in at 2.6 tonnes (2.9 small tons). It exhibited the standard sauropod body structure, featuring neck and tail that were long with a smaller head and a barrel-shaped trunk that was supported by four legs that resembled columns. Its neck Amargasaurus was longer than the majority of sauropods, which is an occurrence in the Dicraeosauridae. With a length of 2.4 metres (7.9 feet) in length, the neck was equivalent to 136 percent of the length of the vertebral dorsal column. This is similar to Dicraeosaurus (123 percent) however, it is higher than the extremely short-necked version of Brachytrachelopan (75 75 percent). The neck comprised thirteen cervical vertebrae. They were the opisthocoelous (convex towards both ends and hollow in the back) creating ball-and-socket joint with vertebrae that were adjacent. The trunk consisted of nine dorsal and likely five sacral vertebrae that were fused. The dorsals with the highest opisthocoelous content were and the rest were amphiplatyan (flat on both sides). Strong Transverse process (lateral projections that connect to ribs) signify a robustly developed rib cage. Dorsal vertebrae of Amargasaurus as well as other dicraeosaurids were devoid of pleurocoels, which are the large lateral excavations typical of other sauropods.

The most striking characteristics of the skeleton are the huge up-projecting neural spines that surrounded the neck as well as the anterior dorsal vertebrae. Beginning with the 3rd cervical point onward the neural spines were bifurcated across their entire length, creating two rows. The spines were concentric in cross-section and tapered towards the edges. The largest spines were located on the middle of the neck. They exceeded the height of 60 centimeters (24 inches) at the cervical 8th. The neck was where they were bent backwards and extending over the vertebra adjacent to them. An elongated similar neural spine was discovered within the neck of the similar Bajadasaurus in the year 2019. Contrary to Amargasaurus the spine in this case was bent forward and expanded towards the ends. The dorsal vertebrae – the hip, and the primary tail of Amargasaurus also had spines that were elongated; they were not bifurcated , but formed a paddle-shaped upper end. In the pelvic area, it was large, as evident from the length of the transverse processes that project laterally that formed these sacral vertebrae. The forelimbs were slightly smaller than the hind limbs, which is typical of similar sauropods. The majority of the foot and hand bones weren’t preserved however Amargasaurus probably had five digits each, as is the case with all sauropods.

The rear portion of the skull has been preserved. It could have shown a horselike broad snout with teeth that resembled pencils, like those found in sauropods, for which skulls that are more complete are recognized. Like other dicraeosaurids the outer nasalis (nostril opening) was located in the posterior portion of the skull diagonally over the orbit (eye opening) and was large by proportion. Similar to others of the dinosaurs’ skulls, this one was equipped with three other entrances (fenestrae). The infratemporal fenestrathat was located beneath the orbital fenestra, was lengthy and narrow. In the background of the orbit was the supratemporal fenestra. It in dicraeosaurids was incredibly small and is visible when looking at the skull through the side. This is in contrast to other diapsid reptiles where the openings are directed upwards and therefore visible only from top view. The antorbital fenestra could be situated near the eye opening, but the area isn’t preserved. A unique feature was the tiny openings that were visible on the back of skulls, also known as fontanelles or parietal openings. In other Tetrapods, these openings are typically seen in young animals and will shrink as an individual matures. Skull features shared by Dicraeosaurus but not seen in other sauropods include those frontal bone fusions, as well as the particularly long basipterygoid process bones that connect the braincase and the palate.

The sole skeleton that is known (specimen ID MACN-N15) was found during February of 1984, through Guillermo Rougier during an expedition that was led by Argentine paleontologist Jose Bonaparte. This was the eighth mission part of the research project “Jurassic and Cretaceous Terrestrial Vertebrates of South America”, that was backed by the National Geographic Society and initiated in 1975 to enhance the shaky knowledge of Jurassic and Cretaceous Tetrapod life in South America. This same trip revealed the complete skeleton of the Horned Theropod Carnotaurus. The site of discovery is inside the La Amarga arroyo in the Picun Leufu Department of Neuquen Province located in northern Patagonia 70 km (43 miles) south of Zapala. The skeleton is derived from sedimentary rocks from the La Amarga Formation, which is believed to date back to the Barremian through the early Aptian phases in The Early Cretaceous, or around 130-120 million years ago.

The skeleton is fairly complete, and it also contains a fragment of a skull. Sauropod skull bones aren’t often discovered as is it is believed that the Amargasaurus skull is the second skull to be identified as one belonging to the Dicraeosauridae. The skeleton’s major parts were discovered in their original anatomical positions The vertebral column of both the spine and the neck comprised of articulated 22 vertebrae was discovered connected to the sacrum and the skull. Within the skull, only the temporal region as well as the braincase have been preserved. The sacrum, although slightly eroded prior burial, is largely complete. A large portion parts of the tail are missing there are three front, three middle and one vertebrae posterior being preserved, as are fragments from a variety of other. The shoulder girdle can be identified as the scapula (shoulder blade) as well as the coracoid (which rests at the lower part of the scapula) and the pelvis is recognized by the ilium (the topmost of the pelvic bone). The limbs are similarly fragile with the manus (hand) and the majority of the pes (foot) missing. The skeleton is stored at the Bernardino Rivadavia Natural Sciences Museum in Buenos Aires.

The initial, non-official reference to Amargasaurus as the genus that was created by dinosaurs was made by Bonaparte in 1984’s Italian publication Sulle Orme dei Dinosauri. In this book, the species was named Amargasaurus Groeberi in honor of Pablo Groeber, which was changed to Amargasaurus cazaui as part of the description, published several years afterward. The official description of the species, written in Spanish and released in the year 1991 with the help of Leonardo Salgado and Bonaparte in the Argentinian scientific journal Ameghiniana. The name Amargasaurus refers to the place of discovery, known as the La Amarga Arroyo. La Amarga is also the name of the town that is located nearby and the formation of the earth that the remains were discovered from. It is believed that amarga is Spanish meaning “bitter”, while sauros is Greek meaning “lizard”. The specie (A. cazaui) is named in the memory of Luis Cazau, a geologist associated with the YPF oil company which, at the time, was owned by the state. It was in 1983 that Cazau advised Bonaparte’s group regarding the significance of paleontology in La Amarga Formation. La Amarga Formation, leading to the discovery of the skull. Six years following, Salgado and Jorge O. Calvo published a new article that focused on the skull’s description.