When it Lived : Late Cretaceous, 95-70 million years ago

The Spinosaurus (meaning “spine lizard”) is a genus belonging to the spinosaurid dinosaurs that lived in what is currently can be called North Africa during the Cenomanian to the upper Turonian phases in the Late Cretaceous period, about 99 to 93.5 million years ago. The genus first came to light through Egyptian remains found in 1912, and was described by German Palaeontologist Ernst Stromer in 1915. The initial remains were destroyed during World War II, but new material came out in the first quarter of the 21st century. It is not clear if the species of interest are included by the fossils described in the scientific journal. The most well-known kind is S. Aegyptiacus, which is from Egypt however a possible additional species S. maroccanus was discovered in Morocco. The modern spinosaurid genus Sigilmassasaurus is also being compared by certain researchers with S. Aegyptiacus. However others have suggested it could be an entirely distinct taxon. A possible junior synonym could be Oxalaia of the Alcantara Formation in Brazil. 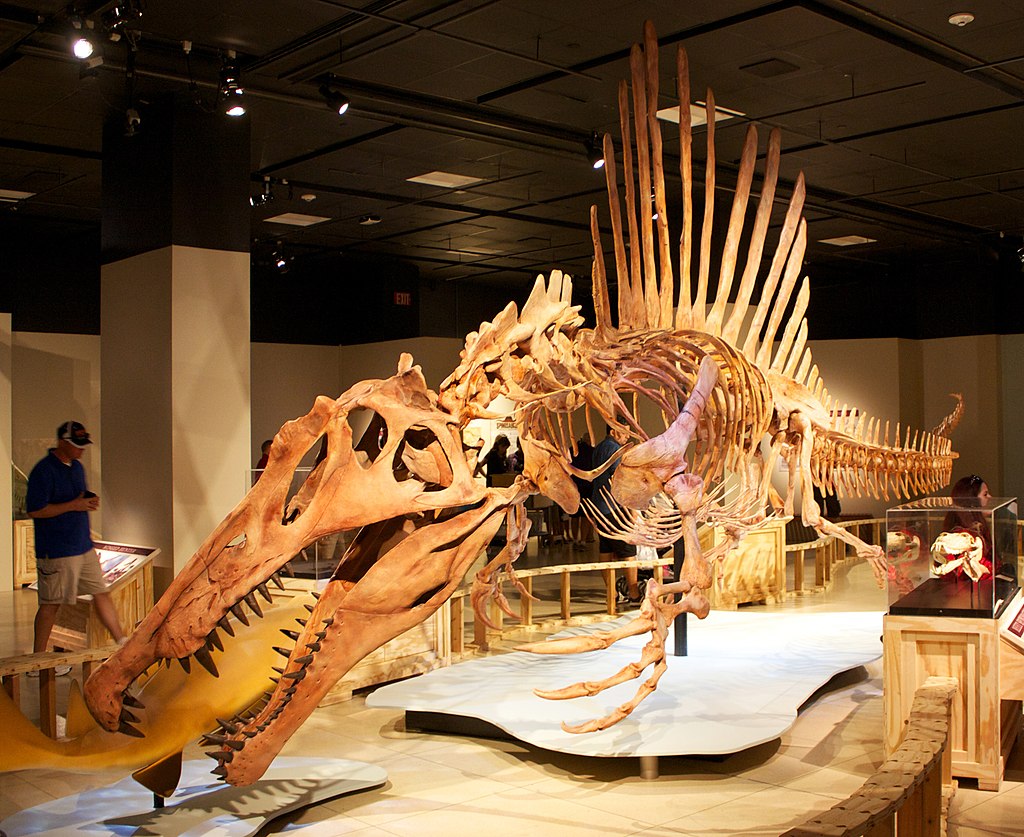 Mike Bowler from Canada, CC BY 2.0, via Wikimedia Commons

Spinosaurus is the biggest of all terrestrial carnivores. Other large carnivores similar in size to Spinosaurus include theropods like Tyrannosaurus Giganotosaurus, Tyrannosaurus and Carcharodontosaurus. The estimates published in the years 2005 and 2007 and 2008 indicated that the species was 12.6 up to 18 metres (41 to 59 feet) in length. It also ranged from 7 to 20.9 tonnes (7.7 up to 23.0 shorter tonnes) with regards to weight. The new estimates that were released in 2014 and 2018 from a larger specimen, confirmed earlier findings, indicating that Spinosaurus may attain lengths of between 15 and 16 metres (49 to 52 feet). According to the latest estimates, it could have that the weight ranges from 6.4 to 7.5 tonnes (7.1 8.3 to 8.3 shorter tons). Spinosaurus’ skull Spinosaurus was large slim and low, much like that of the modern crocodilian and had straight conical teeth without serrations. The skull would have been large strong forelimbs that were robust and had three-fingered hands with an extended claw that was located on the top finger. The distinct spinal spines that characterize Spinosaurus were long extensions of vertebrae (or backbones) were the minimum of 1.65 meters (5.4 feet) in length and are likely to be covered with skin joining to them, creating the shape of a sail. However, certain authors have suggested they were covered with fat and created the shape of a”hump. The hip bones of the Spinosaurus were weakened and its legs were extremely short in comparison in comparison to body. The long and narrow tail was further elongated by the tall, thin neural spines, and elongated chevrons creating the shape of a paddle-like fin, or a flexible structure.

Spinosaurus was known for its consuming of fish and many scientists believe they hunted for terrestrial as well as aquatic prey. The evidence suggests that it was a semiaquatic species and lived on land as well as in water, much as contemporary crocodilians do. The bones of the legs of Spinosaurus had osteosclerosis (high bone density) which allowed to control buoyancy better, as well as the paddle-like tail could have been employed to propel underwater. Many functions are attributed to the dorsal sail, such as display and thermoregulation, or to frighten rivals or draw friends. Spinosaurus was a resident of an environment that was humid, with mangrove forests and tidal flats along with other dinosaurs and also fish, crocodylomorphs and lizards as well as turtles, pterosaurs and Plesiosaurs.

The first known fossils of Spinosaurus were discovered and documented in the beginning of the 20th century. The year 1912 was when Richard Marcgraf found the skeleton fragments of a huge theropod dinosaur found in the Bahariya Formation of western Egypt. The year 1915 was the first time German paleontologist Ernst Stromer published an article that assigned that specimen to a newly discovered species and genus called Spinosaurus aegyptiacus.

Additional fragments of remains from Bahariya such as vertebrae and hindlimb bones were classified by Stromer as “Spinosaurus B” in 1934. Stromer thought they were distinct enough to belong to a different species and this is now proven. With the help of further explorations and research It appears they belong either to Carcharodontosaurus or Sigilmassasaurus.

S. maroccanus has been first named in the works of Dale Russell in 1996 as the first species to be described founded on their neck vertebrae’s length. In particular, Russell claimed that the ratio of the length of the centrum (body of vertebra) to the height of the posterior articular surface is 1.1 for S. Aegyptiacus, and 1.5 for S. maroccanus. Other authors have been divided regarding this subject. Certain authors point out how long vertebrae may differ from one to individual, and that the Holotype specimen was destroyed, and can’t be directly compared to those of S. maroccanus species and it is unclear what cervical vertebrae S. maroccanus samples depict. Thus, although some people have regarded the species’ validity without much discussion, most scientists view S. maroccanus as being a nomen dubium (dubious name) or as a junior synonym for S. Aegyptiacus.