Psittacosaurus is a genus extinct ceratopsian dinosaur that existed between 126 million and 101 millions years ago. It is the most species-rich nonavian dinosaur genus. There are 12 species from China, Mongolia and Siberia. Psittacosaurus was an obligate biped at the time of its adulthood. It had a large skull and a strong beak. A single specimen was found with long filaments along the tail. This is similar to Tianyulong. Based on the size and proportions of its brain, Psittacosaurus may have had complex behaviours. It could have been active only for short periods of the day or night and had developed senses of smell, vision and taste. 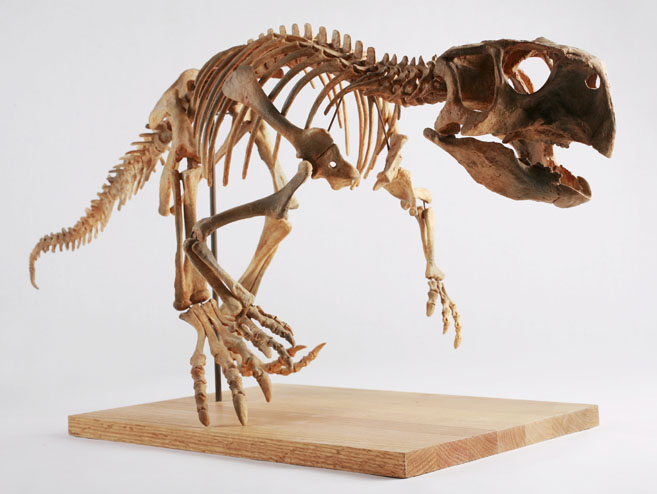 The Children’s Museum of Indianapolis, CC BY-SA 3.0, via Wikimedia Commons

Psittacosaurus is one of the earliest ceratopsians. However, it was closer to Triceratops then Yinlong. It was once a member of Psittacosauridae with other genera such as Hongshanosaurus. Now it is considered to be a senior synonym of the latter, and an early offshoot from the branch that gave rise to many derived forms. Psittacosaurus is closely related to several genera that are from Asia. Aquilops is from North America. It is possible that the first species was P. lujiatunensis, or a closely related one. This may have been responsible for later forms of Psittacosaurus.

Psittacosaurus, one of the most well-known dinosaur genera, is a very important one. Fossils from hundreds of individuals have been found, many of which are complete skeletons. All age groups are represented, including hatchlings through to adults. This has allowed for detailed research on Psittacosaurus growth and reproduction rates. This dinosaur is abundant in fossil records, which led to the designation of Lower Cretaceous sediments from east Asia as the Psittacosaurus Biochron.

Henry Fairfield Osborn first described Psittacosaurus as a genus on February 23, 1923. The type species was named P. mongoliensis because of the place where it was discovered in Mongolia. He also placed it in the new family Psittacosauridae. The type specimen (AMNH6254) was discovered by Wong, one of the American Museum of Natural History’s third expeditions to the Gobi Desert of Mongolia. It contains a complete skull and a post-cranial skeleton that lacks sections of the limbs. The same expedition also found the remains of several other Mongolian dinosaurs such as Oviraptor and Protoceratops. Numerous other expeditions using a variety of American, Polish and Canadian paleontologists recovered specimens from Mongolia and northern China. These fossils of Psittacosaurus Mongoliensis can be found in sedimentary strata that date back to the Aptian-Albian stages of the Early Cretaceous Period (125 to 100 mya). Over 75 fossil remains have been found, including 20 complete skull-capable skeletons. There are many ages of individuals, from tiny hatchlings measuring less than 13 cm (5.1 inches) to large adults that reach nearly 2 meters (6 ft 7in) in length.

C. C. Young, a 1931 biologist, named a new species Psittacosaurus after a partial skull he found in Inner Mongolia, China. After Henry Fairfield Osborn, the skull was given the name P. osborni. This species’ validity is now considered to be equivocal. Sereno (1990), considered it to be a synonym for P. mongoliensis. This species is also found in other strata of the same age. You and Dodson (2004) both listed it as valid in the table but not in the text. Sereno considered P. osborni to be a synonym for P. mongoliensis in a 2010 review. However, he noted that it was not definitive because of the existence of multiple valid psittacosaur types in Inner Mongolia. Young also mentioned the species P. tingi, which was included in the 1931 report. This is based upon several skull fragments. Later, he named the two species P. osborni. Dodson (2004) and you followed the same table. However, Sereno considered both species synonyms for P. mongoliensis. A table in the latter however reported P. tingi to be a nomen Dubium. In 1983, the front half of a skull found in Guyang County, Inner Mongolia was called Psittacosaurus guysangensis. Multiple individuals were represented by disarticulated postcranial remains found in the same area. They were then assigned the species. It is not the same as the P. mongoliensis type specimen, but it falls within the range for individual variation found in other specimens. Therefore, it is no longer recognized as a valid species. You and Dodson (2004) included P. guysangensis as a valid taxa in a table, but they did not mention it in their text.