Pinacosaurus (meaning “Plank lizard”) is a genus of ankylosaurid thyreophoran dinosaur that lived in Asia during the Late Cretaceous (Santonian-Campanian, roughly 80 million to 75 million years ago), mainly in Mongolia and China. 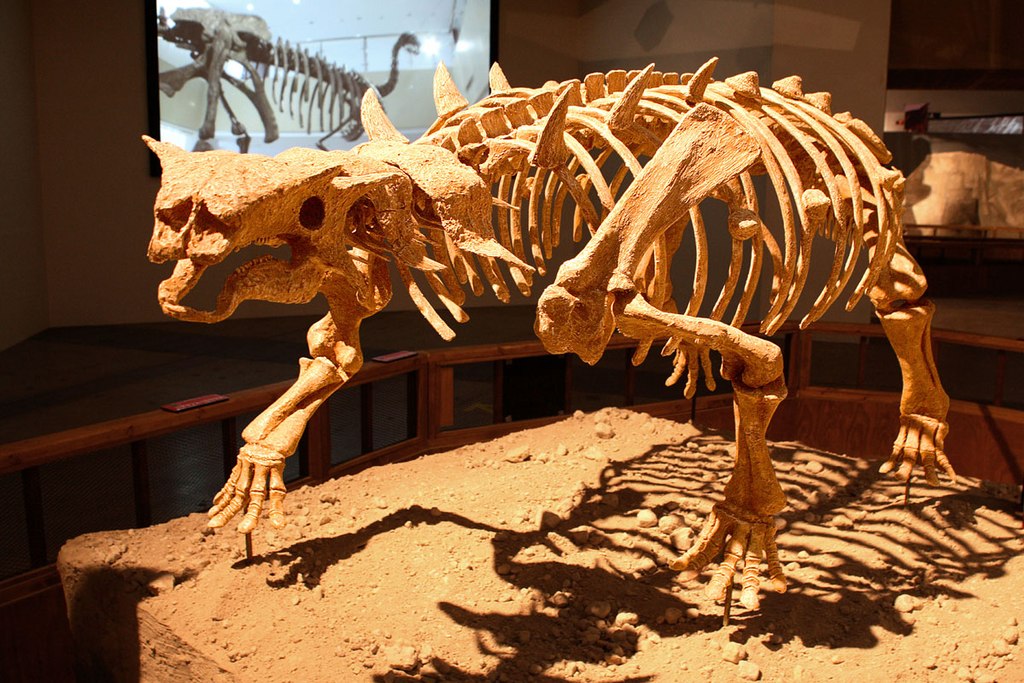 Pinacosaurus, a medium-sized ankylosaurine that measured approximately five metres in length and weighed upto two tonnes, was about five meters long. Its body was low and flat, but it wasn’t as heavy-built as some of the Ankylosaurinae members. Its name derives from the protection provided by bone tiles. Each nostril was made by a large depression that was pierced with between three to five smaller holes. The purpose of these smaller holes is unknown. The smooth beak was used to remove low-growing plants. These were then sliced with rows of small teeth, and then swallowed by the huge hind gut. An armour of keeled bonems protected the neck, back and tail. A tail club was also an option to protect the animal.

In the 1920s, the American Museum of Natural History sponsored many Central Asiatic Expeditions to Mongolia’s Gobi Desert. The original Pinacosaurus specimens were among the paleontological discoveries made at the “Flaming Cliffs”, Shabarakh Usu’s Djadokhta Formation. They were discovered by Walter W. Granger, in 1923. Charles Whitney Gilmore, in 1933, described a right and tail ilium, but did not name the animal. He later described and named the type species Pinacosaurus grangeri in a publication that was published the following year. In reference to the small, rectangular scutes that cover the head, the generic name derives from the Greek pinax (pinax), “plank”. Granger, a paleontologist who was part of the 1923 expedition, is the specific name.

AMNH 6523 was the holotype. It was discovered in the Djadokhta Formation layer, which dates back to the Campanian. It includes a partially crushed skull and lower jaws. The first two neck vertebrae were also included. Dermal bones were collected in 1923. It is the largest skull in the genus.

Pinacosaurus is one of the most well-known ankylosaurs in Asia. There have been many specimens. Many other fossils were reported from the original Flaming Cliffs and Shabarakh Usu, including ZPALMgD I/1: A nearly complete skeleton, ZPALMgD MgDI/9: A postcranial-skeleton; ZPALMgD III/31: The handle of a tailclub; and PIN3780/3: A skull. PIN 614 is a nearly complete postcranial (= Syrmosaurus vimnocaudus); and possibly MPC100/1305, an incorrectly described as being from Saichania. Alag Teeg, now part of the Alagteeg Formation has entire bonebeds of juvenile animals. Soviet-Mongolian expeditions from 1969 and 1970 found thirty skeletons. Between 1993 and 1998, thirty more were reported by Mongolian-Japanese Expeditions. Between 2001 and 2006, Canadian expeditions reported forty. It is possible that the reports may partly refer to the same material as the remains, since they have not all been dug up. The Canada-China Dinosaur Project found three specimens in Inner Mongolia at Bayan Mandahu in 1987, 1988 and 1990. They were IVPP V16853, a skull with cervical halves; IVPP V16283, a partial skull; IVPP V16854, a nearly complete skull; IVPP V16346, a partial skull; IVPP V16346; and IVPP V16855, a skeleton. Two other, yet unidentified material includes two juveniles found huddled together after being killed in a sandstorm. Pinacosaurus juveniles, unlike ankylosaur bones that were found on the back of their victims, are often found lying on their stomachs with their legs in the inverted position.

The entire juvenile skeleton is now known because of numerous discoveries. Pinacosaurus provides valuable information about the construction of the ankylosaurian skull. The juveniles’ skulls are not fused yet, and there is still evidence of the sutures. Modern research has not covered all of the available data. Teresa Maryanska described a well-preserved juvenile brain in 1971 and 1977. Robert Hill examined the juvenile specimen IGM100/1014 in 2003. Currie published a 2011 study on Currie’s hand and foot. These body parts are often not well known to other ankylosaurs. Michael Burns also wrote an article about four Bayan Mandahu juveniles that year. The postcranial skull MPC 100/1305 was also described in detail in 2011. However, it was at the time only referred to Saichania. Michael Burns and his colleagues recently illustrated and described the original Alag Teeg material, which was taken from Soviet-Mongolian expeditions that took place in 1969 and 1970.