Parasaurolophus (/.paer@so.f@s -,so.r@’loUf@s/) is a genus herbivorous hadrosaurid andnithopod dinosaurs that lived in North America and Asia in the Late Cretaceous Period (76.5-73million years ago). It was both a bipedal and quadrupedal herbivore. P. walkeri, P. tubicen and P. cyrtocristatus are all universally recognized. A fourth species, P. jiayinensis has also been suggested, though it is usually placed in the separate genus Charonosaurus. There are remains from Alberta (Canada), New Mexico, Utah (United States), as well as Heilongjiang (China). William Parks, based on a partial skeleton and a skull found in Alberta in 1922, first described the genus. 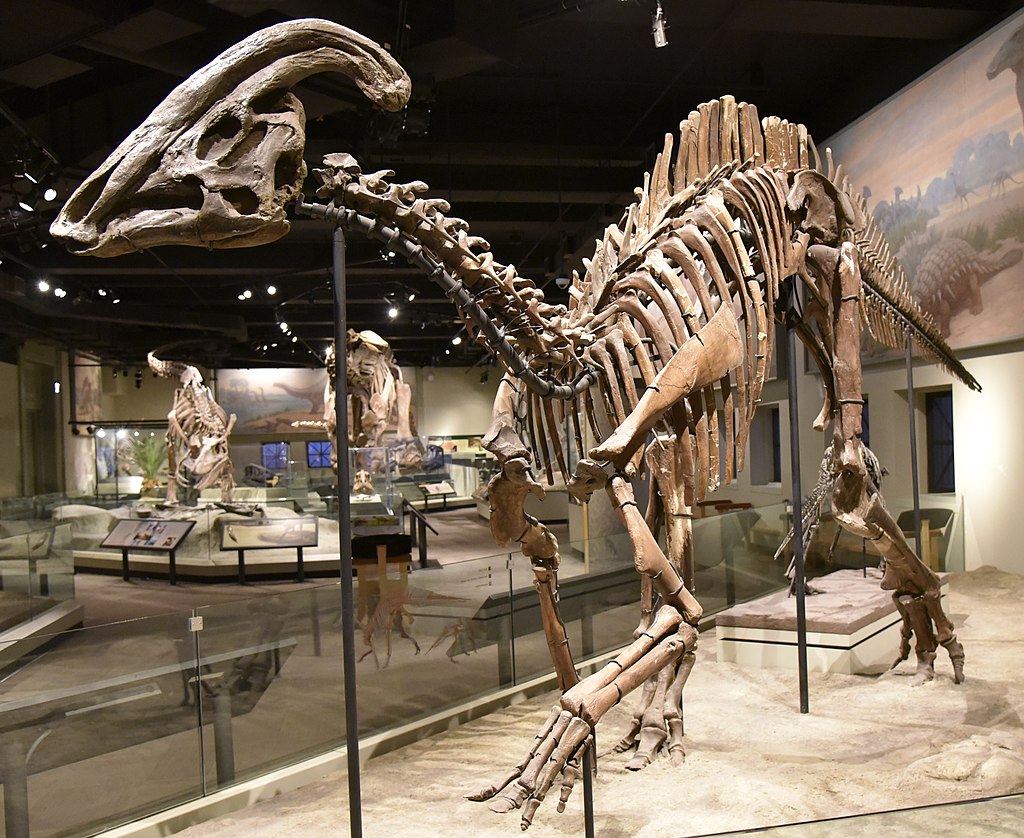 Parasaurolophus, a hadrosaurid that belonged to a wide family of Cretaceous dinosaurs, was an example of a hadrosaurid. He likely used his bizarre head ornaments for communication and better hearing. The genus Parasaurolophus is well-known for its elaborate cranial crown, which forms a long, curving tube that extends upwards from the skull. Charonosaurus, a Chinese relative who may have had a similar skull, and possibly a similar crest, was Charonosaurus of China. The functional explanations for this crest include visual recognition of both species, sex, acoustic resonance and thermoregulation. It is one the most rare hadrosaurids and has been found in only a few good specimens.

Parasaurolophus means “near crested Lizard”, and its name is derived from para/para, which can be translated as “beside” saurus/sauros “lizard”, and lophos/lophos (“crest”) in Greek. It was based on ROM768, a partial skull and skeleton that had most of the tail missing, and which was discovered by a field team from the University of Toronto near Sand Creek, Alberta, Canada, in 1920. These rocks are now called the Campanian-age Upper Cretaceous Dinosaur Park Formation. William Parks gave the specimen the name P. walkeri to Sir Byron Edmund Walker (Chairman of the Board of Trustees of Royal Ontario Museum). Parasaurolophus remains in Alberta are very rare. There is only one partial skull (probably) from the Dinosaur Park Formation and three Dinosaur Park specimens without skulls. These skulls could be part of the genus. Some faunal lists mention possible P.walkeri material in Montana’s Hell Creek Formation, which is a rock unit of the late Maastrichtian era. This occurrence was not mentioned by Sullivan or Williamson in 1999’s review of the genus and has not been elaborated on elsewhere.

Charles H. Sternberg, a 1921-year-old, recovered a partial skull (PMU.R1250), from the Kirtland Formation, San Juan County, New Mexico. Carl Wiman, who described the specimen as P. tubicen in 1931, sent it to Uppsala (Sweden). This epithet comes from the Latin tubicen, “trumpeter”. In 1995, a second, almost complete P. tubicen head (NMMNH P-25100), was discovered in New Mexico. Robert Sullivan and Thomas Williamson used computed tomography to examine the skull and gave the genus a monographic treat in 1999. This included details of the anatomy, taxonomy and functions of the crest. Williamson published an independent review of remains that disagreed with taxonomic conclusions.

John Ostrom in 1961 described another excellent specimen (FMNH P27393), from New Mexico, as P. Cyrtocristatus. It has a partial skull and a rounded, short crest. The postcranial skeleton is missing the neck, feet, and tail. Its Latin names curtus (“shortened”) and cristatus (“crested”) are the origins of its specific name. It was likely to have been found at the Fruitland Formation’s top, or the Kirtland Formation’s base. In 1979, James A. Jensen and David B. Weishampel described a partial skull that bore a similar crest (BYU2467) from the Campanian age Kaiparowits Formation in Garfield County, Utah. Another skull with the morphology of the P. Cyrtocristatus short/round crest has been discovered in Utah.