Pachyrhinosaurus, which means “thick-nosed Lizard”, in Greek, is an extinct genus from the Late Cretaceous period. Charles M. Sternberg, a Canadian geologist, discovered the first specimens in Alberta in 1946. They were named in 1950. In Alaska and Alberta, more than a dozen partial skulls have been discovered. Many of these fossils were not accessible for study until the 1980s. This led to a recent rise in interest in Pachyrhinosaurus.

Three species were identified. P. lakustai is a species that is found in the Wapiti Formation. The bonebed horizon is approximately the same age as the upper Bearpaw Formation and lower Horseshoe Canyon Formations. It is believed to have existed between 73.5-72.5million years ago. P. canadensis, a younger species, is known from the lower Horseshoe Canyon Formation (71.5-71 Ma ago) and the St. Mary River Formation (71-71 Ma ago). Fossils belonging to the youngest species, P. Perotorum, were found in Alaska’s Prince Creek Formation. They date back to 70-69 Ma. This genus is the most diverse among centrosaurines because it contains three species.

Charles Mortram Sternberg described Pachyrhinosaurus canadensis in 1950 based on two incomplete skulls: the holotype NMC 8867 and the paratype NMC 8866. The paratype NMC 8866 included the anterior portion of the skull, but it was missing the right lower mandible and the “beak”. These skulls were taken from the Horseshoe Canyon Formation, Alberta, Canada in 1945 and 1946. Additional material was to be found at the Scabby Butte location of the St. Mary River Formation near Lethbridge in Alberta. It is made from terrestrial sediments that are between 74-66 million years old. These sites were discovered in 1880s and were the first to be found by dinosaurs in the province. These discoveries were not fully understood until just after World War II, when preliminary excavations were made. 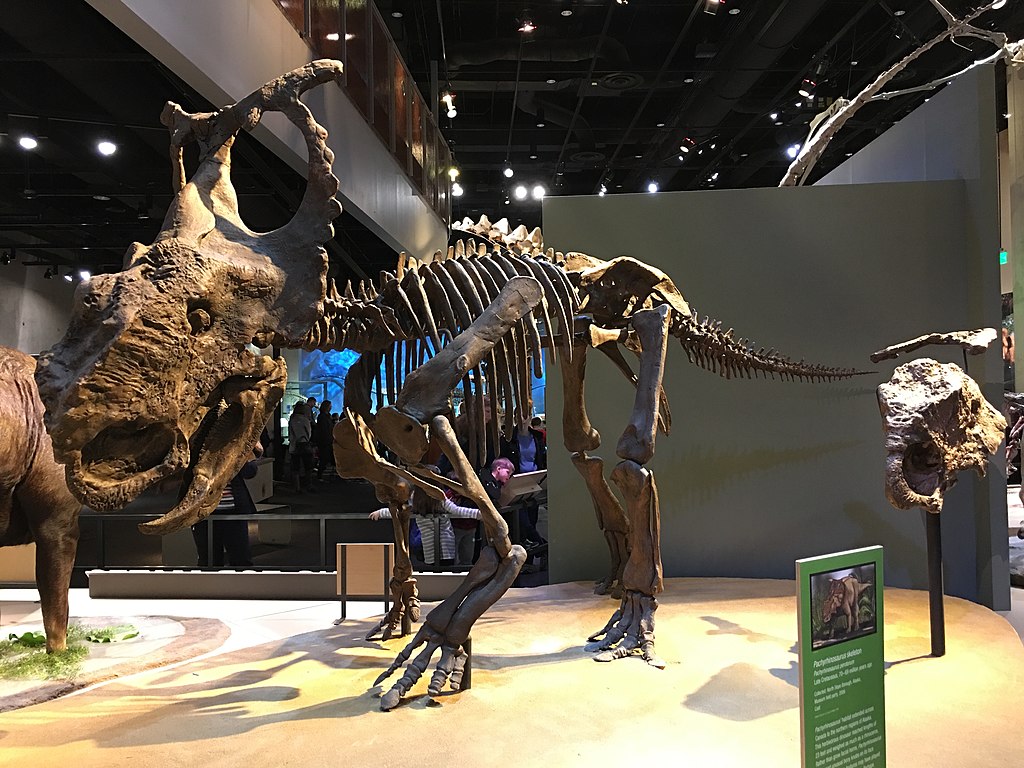 Another Pachyrhinosaurus bonebed was found on the Wapiti River, south of Beaverlodge, northwestern Alberta. It was briefly worked by staff of Royal Tyrrell Museum in late 1980s, but now the University of Alberta works annually for a few weeks each summer since 2006. This material appears to be Pachyrhinosaurus Canadensis. Al Lakusta, a Grande Prairie science teacher from Alberta, discovered a large bonebed near Pipestone Creek in Alberta in 1974. The area was excavated by volunteers and staff of the Royal Tyrrell Museum of Palaeontology between 1986 and 1989. Paleontologists found a remarkable amount of bones, up to 100 per square meter. There were also 14 skulls and 3,500 bones. It was the likely site of mass mortality or a failed attempt at crossing a river during floods. The skeletons of four age groups, from young dinosaurs to fully grown dinosaurs, were found among the fossils. This indicates that the Pachyrhinosaurus took care of their young. Adult skulls featured both convex bosses and concave bosses, as well as unicorn-style ears on the parietal bone right behind their eyes. The types of concave bosses might not be indicative of male/female gender differences but may only be due to erosion.

A monograph describing the Pipestone Creek pachyrhinosaur skull was published in 2008. It was authored by Philip J. Currie and Wann Langston Jr. and Darren Tanke. The specimen was classified as a second Pachyrhinosaurus species and named P. lakustai, after its discoverer.

In 2013, Fiorillo et al. A new specimen was described, an incomplete nasal bone that is attributable to Pachyrhinosaurus Perotorum. It was taken from the Kikak-Tegoseak Quarry of the Colville River in Alaska. Fiorillo et al. This unique species of northern Alaskan fish was named after Ross Perot, a Texas oil billionaire who also served as benefactor. The bone is DMNH 21460 and belongs to an immature person. This discovery increases the age profile for this dinosaur genus. This specimen shows nasal ornamentation that has been dorsally expanded, which is indicative of a intermediate stage in growth. The authors noted that the posterior nasal part shows evidence of “an unpredicted degree of integument complexity” not seen in any other Pachyrhinosaurus species. The nasal boss’s dorsal surface was found to have a thick, cornified sheath and pad.