Omeisaurus, which means “Omei Lizard”, is a genus sauropod dinosaur that was discovered in the Middle Jurassic Period (Bathonian–Callovian stage), of what is now China. Its name derives from Mount Emei where it was found in the Lower Shaximiao Formation, Sichuan Province.

Omeisaurus, like most sauropods was large and herbivorous. O. tianfuensis was 20.2 metres (66 feet) long and weighed 9.8 tons. 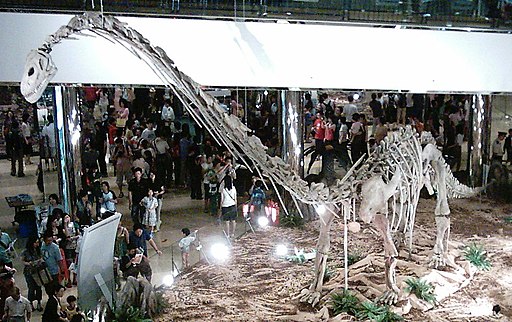 In 1939, Omeisaurus was the first to be described. It was named after Omeishan, the sacred mountain where Omeisaurus’ first fossil specimen was discovered. Most Omeisaurus skeletons were discovered during the “Chinese dinosaur rush” in the 1970s and 80s. Eight species of Omeisaurus have been identified so far: O. junghsiensis (O. changshouensis), O. fuxiensis O. tianfuensis O. luoquanensis O. maoianus O. jiaoi and O. puxiani. The names of all these species, except the two last ones, were given after their locations. O. fuxiensis, which measured around 35 feet (11m) in length, was the smallest of all species. O. tianfuensis, with a neck length of around 30 feet (9.1m), was the longest species in the genus. Mamenchisaurus was the only dinosaur to have a longer neck. In 1988/1989, tail clubs were called Omeisaurus Tienfuensis. However, Paul Upchurch considered them to be Shunosaurus clubs in 2004. In their paper on Qijianglong Xing et al. (2015) considered O. maoianus to be more closely related than O. tianfuensis to Mamenchisaurus. This was supported by Ren’s cladistic analysis. (2018).

Mounted skeletons from Omeisaurus can be seen at the Zigong Dinosaur Museum, Zigong Province, and at Beipei Museum near Chongqing in China.