Majungasaurus (/m@,dZ^NGg@’so:r@s/; “Mahajanga lizard”) is a genus of abelisaurid theropod dinosaur that lived in Madagascar from 70 to 66 million years ago, at the end of the Cretaceous Period, making it one of the last known non-avian dinosaurs that went extinct during the Cretaceous-Paleogene extinction event. Majungasaurus Crenatissimus is the only species in this genus. Majungatholus is another name for this dinosaur, which is considered to be a junior synonym for Majungasaurus. 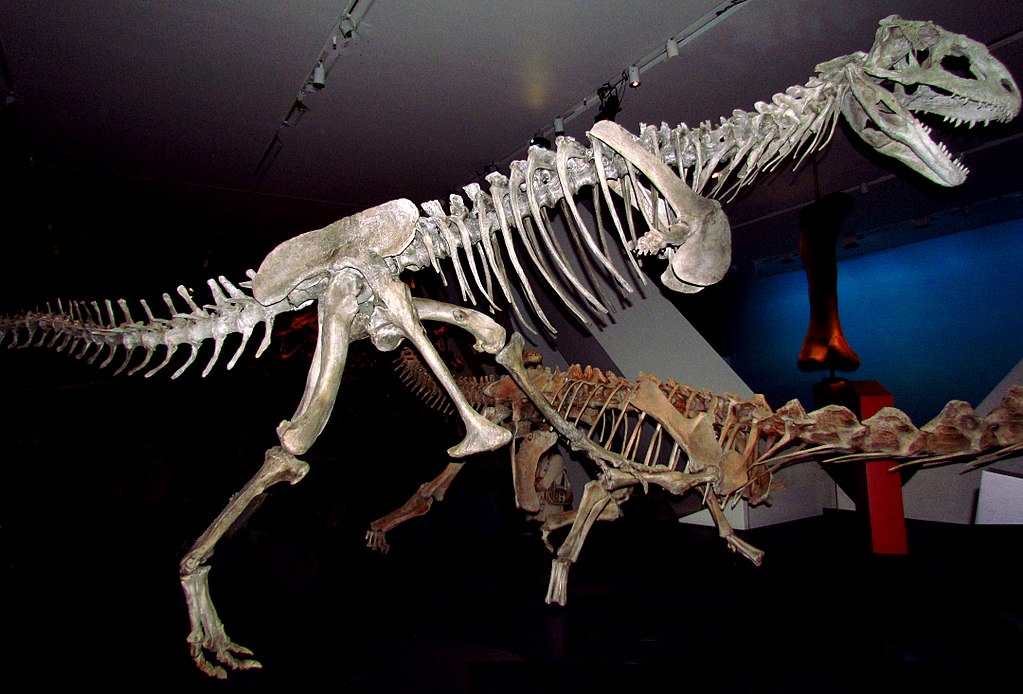 Majungasaurus, like other abelisaurids had a bipedal predator with short snout. The forelimbs of Majungasaurus aren’t fully understood, but they were quite short. While the hind limbs were much longer and more stocky, the forelimbs are not. It is distinguished from other abelisaurids based on its larger skull, its thickened bone and rough texture on its top snout, as well as the single, rounded horn that covers its skull roof, which was mistaken for the dome a pachycephalosaur. It had more teeth in its upper and lower jaws that most other abelisaurids.

Majungasaurus is a well-known theropod dinosaur from the Southern Hemisphere, with several well-preserved skulls. It is more closely related to the abelisaurids of India than to those from South America or Africa, which has important biogeographical implications. Majungasaurus was its apex predator, preying on sauropods such as Rapetosaurus. It is also one the few dinosaurs that has direct evidence of cannibalism.

In 1896, Charles Deperet, a French paleontologist, described the first known theropod remains of northwestern Madagascar. They included two teeth and a claw as well as some vertebrae that were discovered by a French officer along the Betsiboka River. These were deposited in the collection now known to be the Universite Claude Bern Lyon 1. Deperet referred the fossils to the Megalosaurus, at that time a wastebasket taxon which contained any number of large theropods unrelated, as the new species M. Crenatissimus. The Latin word crenatus (“notched”) is combined with the suffix “most” to refer to the many serrations along the front and back edges of the teeth. Deperet later assigned the species to Dryptosaurus in North America, another less well-known taxon.

Over the next 100 years French collectors recovered many fragmentary remains from Mahajanga province in northwestern Madagascar. Many of these were deposited at the Museum National d’Histoire Naturelle, Paris. Rene Lavocat, a 1955 French collector, described a theropod dental (MNHN.MAJ 1), with teeth from the Maevarano Formation. This was the exact region that the original material was found. Although the teeth were identical to those originally described by Deperet’s, the jaw bone that was strongly curved was quite different from Megalosaurus or Dryptosaurus. Based on this dentary Lavocat created Majungasaurus. He used an older spelling of Mahajanga and the Greek word sauros, which means “lizard”. Philippe Taquet and Hans-Dieter Sues described a fragment of a skull with a dome-shaped shape (MNHN.MAJ 4), as a new pachycephalosaur genus (Majungatholus opus). This was the first pachycephalosaur to be discovered in the Southern Hemisphere.

Scientists from the State University of New York, Stony Brook, and the University of Antanarivo started the Mahajanga Basin Project in 1993. This project was a series of expeditions that examined the fossils, geology, and geology of the Late Cretaceous sediments close to the village of Berivotra, Mahajanga Province. David W. Krause, a paleontologist from Stony Brook was one of these scientists. The first expedition found hundreds of theropod tooth that were identical to Majungasaurus’s. Some of these teeth were also attached to a premaxilla, which was first described in 1996. The seven subsequent expeditions turned up thousands of fossils, many belonging to new species. The Mahajanga Basin Project is credited with increasing the diversity of fossil taxa within the region.

In 1996, fieldwork revealed a remarkablely complete and preserved in great detail theropod skull (FMNH PR 2110). A dome-shaped swelling was found on top of the skull, almost identical to that described by Sues & Taquet as Majungatholus. In 1998, Majungatholus was renamed as an abelisaurid instead of a pachycephalosaur. Majungasaurus Crenatissimus is older than Majungatholus Atopus. However, the authors considered the Majungasaurus type dentary too fragmentary for them to assign it to the same species. Over the next ten years, more skulls were discovered. There was also a number of incomplete skulls and dozens of partial bones of individuals from young to old. The project members also collected thousands of Majungasaurus teeth and hundreds of individual bones. These remains, taken together, represent almost all of the bones in the skeleton. However, the forelimbs, pelvis and tip of the tail are not yet known. The 2007 monograph, which included seven papers covering all aspects of the animal’s biology, was the result of this fieldwork. It was published in the Society of Vertebrate Paleontology Memoirs. Although the papers are written in English, each abstract is in Malagasy. The Lavocat dentary was re-evaluated in this volume and found to be diagnostic for the species. Majungasaurus was renamed Majungatholus. The editors acknowledged that the monograph was comprehensive but only covered material from 1993 to 2001. There were many specimens that were not complete but were found in 2003 and 2005. These specimens are still being prepared and described in future publications. After a petition to the ICZN in 2009, the dentary was designated the neotype specimen.