Hypselosaurus, which means ‘highest-ranking lizard’ from the Greek upselos (meaning high or lofty) and sauros (meaning lizard), is a dubious genus that includes titanosaurian sauropods. It lived in southern France in the Late Cretaceous about 70 million years ago in early Maastrichtian. Although Hypselosaurus first appeared in 1846, it was not officially named until 1869 when Phillip Matheron gave it the binomial Hypselosaurus priscus. Two eggshell fragments and a partial hindlimb were found with the holotype specimen. Matheron and Paul Gervais were among the first to assign several eggs from the same area of France to Hypselosaurus because of their proximity to fossil remains. However, the differences and variation between the eggs suggests that they are not all part of the same taxon. Hypselosaurus was found in the same Formation as Pyroraptor and Variraptor, the Rhabdodon ornithopod, and the ankylosaurian Rhodanosaurus. There are also indeterminate bones from other groups. 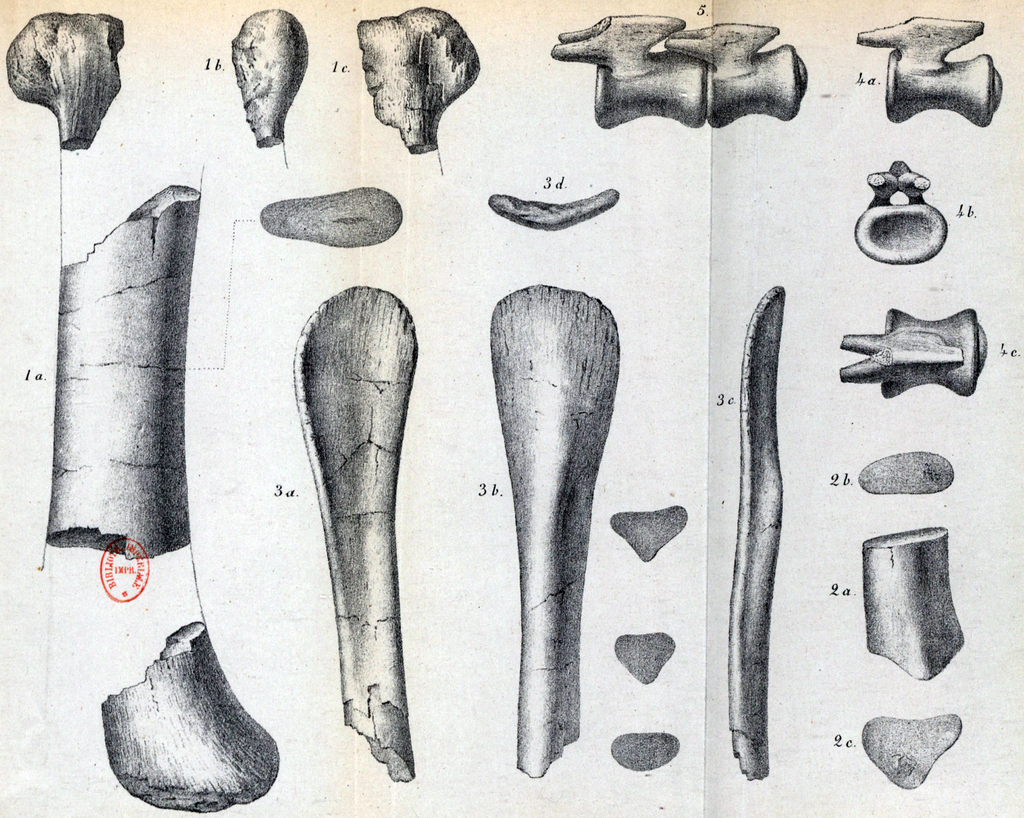 Pierre Philippe Emile Matheron was a French paleontologist and geologist who described large bones from Provence in 1846. Matheron officially described the remains in 1869. He included a partial femur and fibula, and possibly a tibia. Matheron also identified a pair associated caudal vertebrae as the holotype specimen for a new taxon called Hypselosaurus priscus. Parts of the femur shaft and a large portion of the tibia are missing. However, both the fibula as well as the vertebrae are preserved. The fossils are likely to have come from the Late Cretaceous about 70 million years ago.

Many specimens of this species have been referred back to Hypselosaurus since its original description. Albert de Lapparent originally described one of these in 1957. Bataller also described another in 1960. A 1993 review of European sauropods found that Hypselosaurus had been classified as a nomen Dubium and that its holotype couldn’t be distinguished from other sauropods living in the same or similar regions. This would mean that the Hypselosaurus material referred to by other authors must be considered an intermediate titanosaur.

Matheron also described two fragments of an ellipsoid or spherical fossil in 1869. Matheron and his French colleagues studied these fragments for some time. The only conclusion that Matheron could draw was that they were eggshell fragments. Matheron proposed that the eggs were significantly larger than those of Aepyornis. He also suggested that they belonged to Hypselosaurus or a large bird egg.

Matheron suggested that Hypselosaurus, when it was first named, was an aquatic crocodile. This was similar to what was suggested by the authors for taxa like Streptospondylus, Cetiosaurus and Steneosaurus. Matheron noticed that the long bones, especially the femurs, were missing medullary bone and suggested that it couldn’t have been terrestrial like Iguanodon.

Hypselosaurus was a proposal to measure 15 m (49 ft). It was then considered a crocodilian which would have made the animal one of the largest members of the group. Hypselosaurus is now considered a titanosaur, with a length of 12.0 m (39.5 ft) and a weight of 7.3-14.5 tonnes (8-16 short tons). Neuquensaurus is a smaller titanosaur and measures just 7.5m (25 feet) in length.