When it Lived : Late Cretaceous, 86-71 million years ago

Gryposaurus, meaning “hooked-nosed lizard (Greek grypos),” was a genus that included duckbilled dinosaurs. It lived between 80 and 75 million years ago in North America’s Late Cretaceous (late Santonian stage to late Campanian stage). The Dinosaur Park Formation, Alberta, Canada, as well as two formations in the United States, the Lower Two Medicine Formation, Montana, and the Kaiparowits Formation, Utah, contain names for Gryposaurus species. The temporal range of Gryposaurus may be extended to 66,000,000 years by a possible additional species found in Texas’ Javelina Formation. 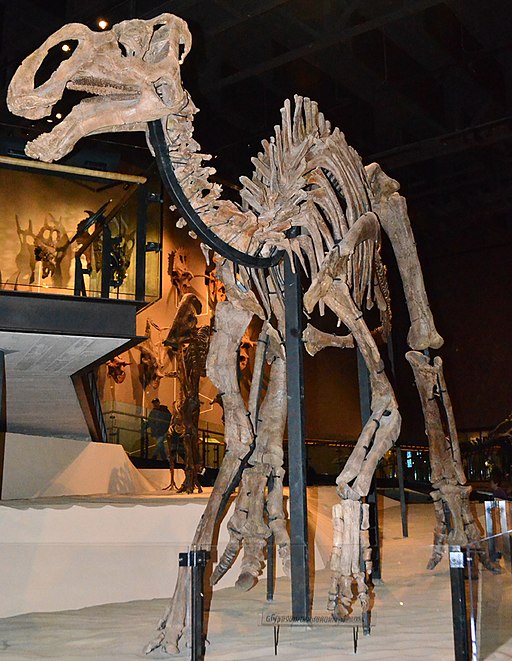 Gryposaurus and Kritosaurus are very similar, so they were often mistaken for one another. Many skulls, skeletons and skin impressions have confirmed its existence. Some even show pyramidal scales running along the middle of the back. The narrow, arching nasal hump that is often compared to a Roman nose makes it stand out from other duckbills. This may have been used to identify species, sexual identity, or combat with members of the same species. It was a large bipedal/quadrupedal herbivore, approximately 9 meters (30 feet) in length.

Robert Taylor from Stirling, Canada, CC BY 2.0, via Wikimedia Commons

Gryposaurus is named after specimen NMC2278, a partial skeleton and skull that George F. Sternberg collected in 1913 from the Dinosaur Park Formation, Alberta, near the Red Deer River. Lawrence Lambe quickly identified and named this specimen, highlighting its unique nasal crest. Barnum Brown had previously collected and documented a partial skull from New Mexico. He named it Kritosaurus. The skull was missing its snout and had been eroded into pieces. Brown restored it after Edmontosaurus, a duckbill, found in New Mexico. He believed some of the unusual pieces were evidence that there was compression. Lambe’s description for Gryposaurus suggested a different skull configuration. By 1916, the Kritosaurus skull was redone with a nasal arched. Both Charles Gilmore and Brown had both proposed that Gryposaurus as well as Kritosaurus were one in the same. William Parks named a nearly complete Dinosaur Park Formation skeleton as Kritosaurus incurvimanus. He did not name Gryposaurus incurvimanus. The fact that the incurvimanus type Kritosaurus specimen is missing the front portion of the skull means that it is difficult to draw a direct comparison with Gryposaurus nuabilis. The 1942 publication of the influential Lull and Wright monograph on hadrosaurs sealed the Kritosaurus/Gryposaurus question for nearly fifty years in favor of Kritosaurus. However, reviews began in the 1990s and called into question Kritosaurus nunavovius’ identity. This duckbill has very limited material that can be compared to other species. Gryposaurus was thus again separated from Kritosaurus, at least temporarily.

The situation is complicated by the old suggestions of Jack Horner that Hadrosaurus could also be called Gryposaurus or Kritosaurus. This hypothesis was popular in the late 1970s and early 1980s. It is found in several popular books. One well-known book, The Illustrated Encyclopedia of Dinosaurs uses Kritosaurus as the Canadian material (Gryposaurus), however, a caption on the photo identifies K. incurvimanus’ mounted skeleton as Hadrosaurus. In 1979 Horner used Hadrosaurus [Kritosaurus] notabilis to describe a partial skull, skeleton, and a second, less complete skeleton from Bearpaw Shale in Montana. However, he changed his position by 1990 and was one of the first to use Gryposaurus again in print. Although only fragmentary material is available, it is believed that Hadrosaurus can be distinguished from Gryposaurus based on differences in the upper arm or ilium.

Further research revealed that G. latidens was also found in Montana. This is a species that has been discovered from rocks older than those of Alberta. G. latidens was also discovered from bonebed material, based on two pieces of a 1916 skeleton that was collected for the American Museum of Natural History. Horner, who described these specimens, thought it was a less derived species.

A skull and a partial skeleton from the Kaiparowits Formation in Utah has been discovered. It is part of the new material found in Grand Staircase–Escalante National Monument. The skull of this species was stronger than the others, and the predentary had larger prongs along the upper margin where the lower jaw’s beak was located. This new species expands the geographical range of this genus and may also include a smaller, lighter-built species. Numerous gryposaur species have been identified from the Kaiparowits Formation. These are represented by cranial or postcranial remains and were larger than their northern counterparts.

Texas’ Javelina Formation and El Picacho Formation have seen indeterminate hadrosaur fossils that resemble Kritosaurus or Gryposaurus for decades. Although none of these remains were ever considered to be a definite genus, they do resemble some Kritosaurini, or at least one species of Kritosaurus. In 2016, however, a possible fourth valid Gryposaurus species, G. asatei, was discovered in Texas’ Javelina Formation. It was named after Alsate who was the last leader among the Mescalero Apaches. It is still possible to verify its validity.

Gryposaurus was a hadrosaurid that was typical in size and shape. The nearly complete type specimen from Kritosaurus incurvimanus, now considered a synonym for Gryposaurus justabilis, came from an animal measuring 8.2 meters (27 ft) in length. This specimen is also the best example for Gryposaurus skin impressions. It shows that this dinosaur had a variety of scalations: ridged, pyramidal, and limpet-shaped scales up to 3.8 cm (1.5 inches) on the flanks and tails; uniform polygonal weights on the neck, sides and body; and pyramidal structures. These pyramidal structures were flattened side-by-side with fluted sides and are found along the top and bottom of the back in one row.

Details of the skull and lower jaw of each of the three Gryposaurus species are different. This genus’s prominent nasal arch is made from the paired nasal bone. They rise to a rounded hump in the front of your eyes and reach a height of as high as the highest point on the skull’s back. It is a valuable reference point for other duckbill skulls as the skeleton has been described in great detail.