When it Lived : Late Cretaceous, 76-70 million years ago

Gilmoreosaurus, which means “Charles Whitney Gilmore’s lizard”, is the name given a genus or species of dinosaur from the Cretaceous period of Asia. Gilmoreosaurus Mongoliensis is the type species. It is thought to be an iguanodont or hadrosaur from the Iren Dabasu Formation in Inner Mongolia, which dates back to 96 Ma. G. atavus, a specimen from the Khodzhakul Formation in Uzbekistan (120 m ago), and G. arkhangelskyi, a specimen from the Bissekty Formation (89 m ago) have also been described as distinct species. These are based on fragmentary remains and their classification is disputed. G. kysylkumense, another species from the Bissekty Formation, is sometimes included. However, it has been referred to the related genus Bactrosaurus. 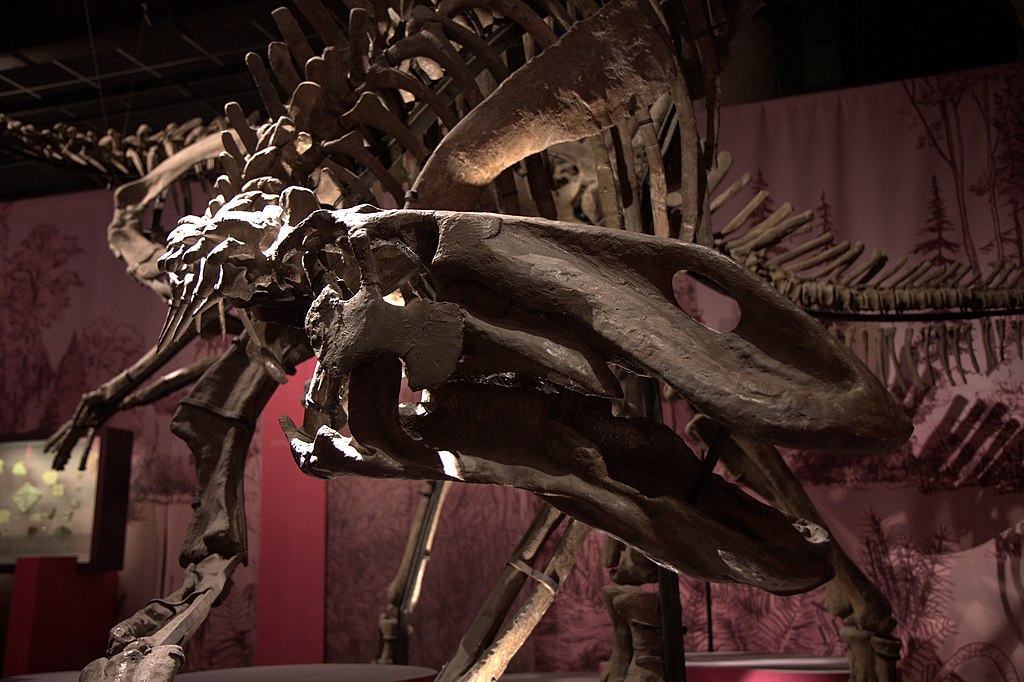 The American Museum of Natural History (AMNH), conducted several palaeontological expeditions into the deserts of Asia in the early 20th century. The Iren Dabasu Formation, Inner Mongolia, China was one geologic formation that was used for these expeditions. Walter Granger led the field team that conducted fieldwork in this area. They were not all experts in dinosaurs, but the AMNH sent mostly geologists and mammal paleontologists. Although many dinosaur remains were found, their nature was not known until American experts examined them. Three days in April and May 1922 were spent excavating dinosaur fossils at Iren Dabasu. They continued their excavations one year later, from April 23rd to June 1st 1923. The formation was home to several new species and genera. Two new hadrosaurs were among them. These two new species would be the most important of all the discoveries. These two were the first to be found from the continent. They were followed by Tanius sinensis and Mandschurosaurus aureus amurensis. Some remains from Turkestan, Saurolophus krischtofovici also made it into the group. However, the validity of these species was already in doubt. George Olsen, a member Granger’s team, discovered the material that would become Gilmoreosaurus. It was found in two quarries (145 & 149), approximately 1 km (0.62 mi), apart. It is located around 14 kilometres (8.7 miles) northeast of Erenhot, not far from the Mongolian border. There were several individuals represented, and most of the skeleton was found between them. However, the material was not disarticulated so it is impossible to know which pieces belong to which individual.

Barnum Brown was given the Mongolian material to study once it arrived back in New York. Brown was well-known for his extensive field collection of dinosaurs. However, he was too busy to attend Asian expeditions. Brown worked extensively on the material, and had already prepared names for the new species. However, he stopped working on the project for unknown reasons. Instead, the fossils were shipped to the Smithsonian where they would be described by Charles W. Gilmore and named new species. The Smithsonian did not have a dinosaur fossil collection, and Gilmore relied more on literature than first-hand comparisons during his research. His work is still considered high-quality despite this. His 1933 findings included descriptions of both hadrosaurs and several other dinosaurs. Bactrosaurus was the new genus that was first thought to be a Lambeosaur. M. mongoliensis, a new Mandschurosaurus species, was named after the second, which is known from at most four individuals. The choice was made with caution. Gilmore was aware that his species might one day require its own genus but didn’t feel that there was enough difference to M. amurensis at the moment. [3] Gilmore’s description was too brief to be useful in understanding the taxon. He also did not provide a clear diagnosis (a list identifying traits that make a species different from its relatives). Gilmore’s work also caused another problem. All the material from all individuals was cataloged under one specimen number. Later palaeontologists had to recatalogize all elements using more modern standards.

After its initial naming, Gilmore’s species was not well understood and received little attention from other paleontologists. However, major taxonomic changes were often made when it was brought up. The nature of the cranial material at the Bactrosaurus Quarry was a persistent problem in the taxonomy discussion about the Iren Dabasu Hadrosaurs. Based on the association of the cranial material with the rest, Gilmore concluded that it must be part of that genus. There were no other elements that could have been inconsistent with only one species at the site. However, he was puzzled by the absence of a hollow-crest that is common among lambeosaurs. Although he considered the possibility that it might belong to M. mongoliensis, he also noticed its similarity to specimens from the genus Tanius. However, he eventually decided to discard both of these ideas. C. C. Young revived this idea and assigned the material as Tanius. He agreed with Gilmore’s referring his species to the Genus. However, he went on to suggest that it could be the same species as M. amurensis. Anatoly K. Roshdestvensky considered a different solution in the 1960s. He believed that Bactrosaurus was a hadrosaurine and not a lambeosaurine. M. mongoliensis was also a synonym for his hadrosaurine Bactrosaurus. This position would be maintained in future works. Future authors would disagree and reaffirm the distinction between the hadrosaurs and Bactrosaurus, calling Bactrosaurus a lambeosaur.

Michael K. Brett–Surman would be the next major shift in taxonomy. He was currently revising the entire family of hadrosaurs. In his 1975 master’s thesis, he made a new diagnosis of the species. Brett-Surman thought Mandschurosaurus beurensis was a dubious diagnosis and he felt it necessary to give Gilmores species a new generic. In 1979, he created Gilmoreosaurus mongoliensis, the new genus Gilmoreosaurus. He considered Gilmore’s two Hadrosaurs of great importance and wrote a brief 1980 paper. He described Gilmoreosaurus’ anatomy as “partly hadrosaurine and partially iguanodont” and considered it the ancestral form. Bactrosaurus was, however, seen as the ancestral lambeosaur. He derived this conclusion partly from Probactrosaurus and the two species. Brett-Surman was particularly interested in the similarities between the Asian fauna and the later fauna of North American Two Medicine Formation. Gilmore had made similar remarks about the natures of American and Asian faunas in his 1933 paper. Gilmore had not described a lot more material from Iren dabasu, particularly material that was juvenile-related. This 1980 paper pointed out this. Brett-Surman stated that John R. Horner and he were working to better understand the fauna of these formations. He concluded his paper with a statement referring to this: “While no further expeditions to Mongolia are possible at this point, more light will be shed upon the natural history of dinosaurs through further scientific expeditions into the basement of the natural science museum.”

In 1981, Teresa Maryanska and Halszka Osmolska published a paper that focused on Saurolophus agustirostris but also included comments about Asian hadrosaurs in general. They also addressed the issue of skull material. The monospecificity of the quarry, i.e. They disagreed with the monospecific nature of the quarry (i.e. only one species seemed to be present) as it was more evidence than the discordant anatomical structure of the material. They revived Young’s model, and tentatively assigned Tanius the material, as they felt it was most fitting. After further research, they discovered that the skull could belong to either Gilmoreosaurus nor Bactrosaurus. In 1985 Horner and David B. Weishampel would examine the material from both Iren Dabasu genera, as well as Gilmore’s material that was never described by Gilmore, as suggested by Brett-Surman. Osmolska gave feedback on their research. Frontal remains were the relevant new material. They considered them to be clearly lambeosaurine in nature and therefore could be referred to as Bactrosaurus. They couldn’t find a way to fit the skull material so they decided that the material was not from the genus. They decided it belonged to Gilmoreosaurus, which was congruent with the hadrosaurine nature of the material. They emphasized the importance of both genera in the best record of early Hadrosaurs at the end of their paper.

Pascal Godefroit, his colleagues and others would end the controversy in 1998 when they published a study that described newly discovered Bactrosaurus material. They reaffirmed Gilmore’s original position, stating that there was no possibility of two taxa being present in the Bactrosaurus type Quarry and that the skull material did not belong to Gilmoreosaurus. The paradoxical nature the anatomy is explained by the fact that Bactrosaurus wasn’t a lambeosaur, or even a hadrosaurid, but rather a primitive form of hadrosauroid that merely converged with its later relatives. It would have been informative to also test the phylogenetic affinity of Gilmoreosaurus, but it was too poorly documented to permit this. A modern review of the species was deemed necessary. Albert Prieto Marquez and Mark A. Norrel set out to resolve the long-standing issue. This redescription was published in 2010. The ultimate motivation behind the project was to resolve its phylogenetic location. The study included all known material from the genus. The redescription allowed for a modern diagnosis (the 1975 one was not correct). The idea that the two Iren Dabasu were synonyms was also discussed. The idea was rejected with many differences being found between them. Since the redescription, studies have shown that Gilmoreosaurus has been included in research on hadrosaur evolutionary history.

Gilmoreosaurus, a large-sized hadrosauroid that could grow to up to 6.2m (20ft) in length and gain weights of between 1.2 and 3.6t (1,200 to 3,600kg). This genus is distinguished from other hadrosauroid taxa by its reduced paddle-shaped postacetabular process, and an asymmetrical manuel phalanx III-1 ending. The preserved elements are sparse, and may represent more than one individual. However, AMNH FARB 30729 is a single animal that was composed of a left radius and ulna.