When it Lived : Late Cretaceous, 76-70 million years ago

Euoplocephalus (/ju:,aploU’sef@l@s/ yoo-OP-loh-SEF-@-l@s) is a genus of very large, herbivorous ankylosaurid dinosaurs, living during the Late Cretaceous of Canada. Only one species is known, Euoplocephalus Tutus. 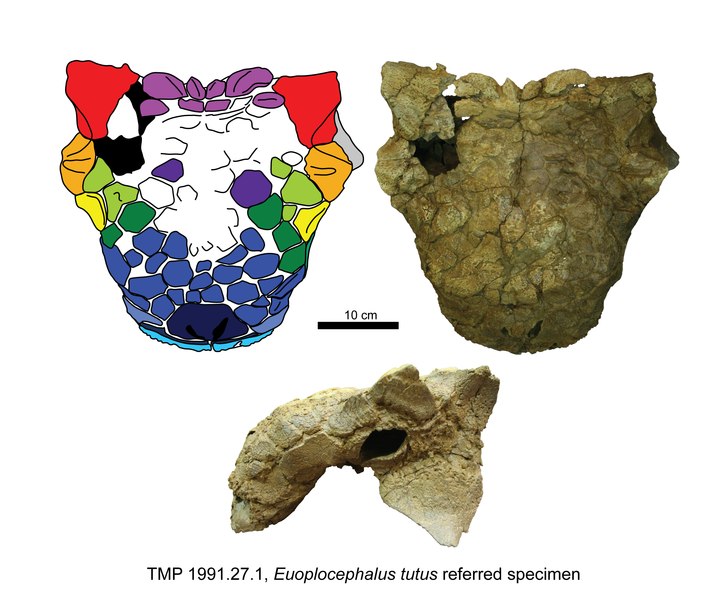 In Alberta, 1897 saw the discovery of the first fossils of Euoplocephalus. It was originally named Stereocephalus in 1902 but this name was already given to an insect so it was changed to Stereocephalus in 1910. Later, more ankylosaurid remains from North America’s Campanian were discovered and sometimes made into separate genera. Walter Coombs in 1971 concluded that all of them belonged to Euoplocephalus, which would have been one of the most well-known dinosaurs. Experts have recently come to an opposite conclusion and limited the number of Euoplocephalus specimens that can be considered authentic to only a dozen. They include several skeletons that are almost complete, but much more is known about the animal’s build.

Lawrence Morris Lambe, a Canadian paleontologist, discovered the first specimen in the Dinosaur Provincial Park in the valley of Red Deer River in Alberta, Canada, on August 18, 1897. This fossil, also known as NMC 210, was designated the holotype specimen for Stereocephalus tutus in 1902. The specimen is composed of the upper portion of a cranium, and a transverse series five scutes that formed part of a cervical half-ring. The Greek stereos, stereos and “solid” were used to name the generic name. Kephale, kephale and “head” refer to the formidable armour. The genus name was preoccupied, however — it had been given to Stereocephalus Lynch 1884, an insect — so Lambe changed the name to Euoplocephalus, in 1910, using a combinatio nu (new combination name), Euoplocephalus tutus. Stereocephalus tutus remains the type species. Edwin Hennig, who classified E. tutus under Palaeoscincus Leidy1856 in 1915, created a Palaeoscincus tutus. Today, however, Palaeoscincus can be considered a nomen Dubium that is based on ankylosaurian indeterminate teeth. Oskar Kuhn used the 1964 name Euoplocephalus to refer to Ankylosaurus as an Ankylosaurus tutus.

Euoplocephalus is the Greek word for “well-armed head”, which derives its genus name from hoplo (oplo), meaning “well” and kephale, meaning “head”. In scientific literature, this name has been mispelled in more than a dozen ways. Latin for tutus, the specific name means “safely protected”. Euoplocephalus tutus is the only valid species currently known.