Citipati ([‘tSi:tIp@ti] meaning “funeral pyre lord”) is a genus belonging to the oviraptorid dinosaurs, which was present in Asia in the Late Cretaceous period, about 75 million to 70 million years ago. It is most well-known by its Ukhaa Tolgod locality at the Djadokhta Formation, where the first remains were found in the 1990s. The genus and the type species Citipati osmolskae were identified and identified in 2001. Another species that is from an adyacent Zamyn Khondt locality may also exist. Citipati is among the most well-known oviraptorids due to several preserved specimens, including those who were found in brooding positions on top of nests of eggs, even though they were all initially classified as the closely related Oviraptor. The nesting species have contributed to establishing the connection between birds and non-avian dinosaurs. 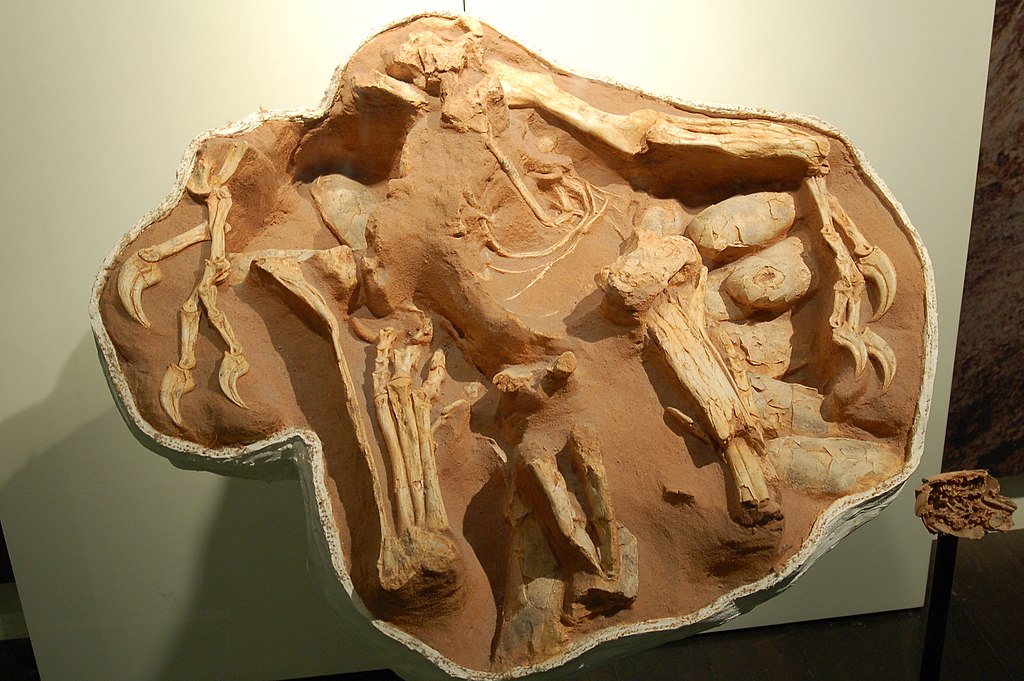 This taxon has been classified an oviraptorid one of the bird-like feathered dinosaurs with strong jaws resembling those of parrots. It is one of the oviraptorid species that have nesting specimens. Citipati laid eggs that were elongatoolithid in an oval mound where parents brooded eggs sitting on the nest, with their arms encircling the perimeter of the nest. The tail and arms were covered with long feathers. This probably protected the juveniles as well as eggs from the elements. Citipati might be an omnivorous oviraptorid due to the fact that it was found that the bones of two infants of the troodontid species contemporaneously known as Byronosaurus were discovered in a nest. They were likely consumed to maturity by the adult Citipati for feeding its young hatchlings. It is also possible that the tiny Byronosaurus was born as a Citipati result that was a result of the nest’s parasite. 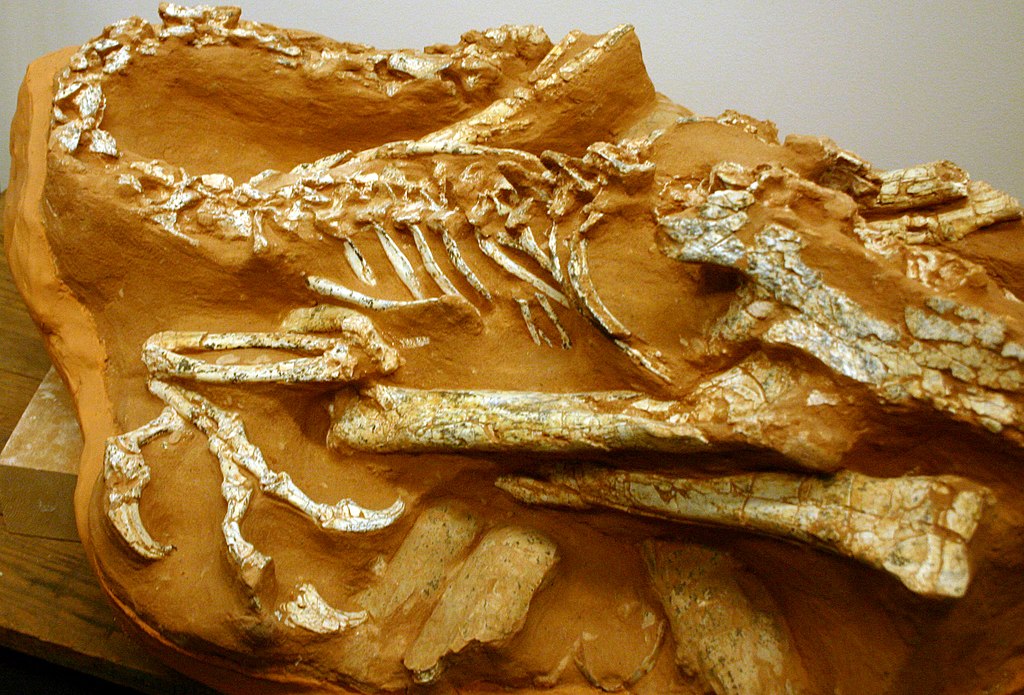 A tiny fossilized embryo of an oviraptorid, identified by the name of an example IGM 100/971, found in a nest located at the Ukhaa Tolgod locality of the extremely fossiliferous Djadokhta Formation, Gobi Desert at the time of Mongolian Academy of Science-American Museum of Natural history paleontological research project. The group also found a variety of mammal, lizard and ankylosaurid fossils. that are found in this area and also at least five different types of fossil eggs found in nests. The oviraptorid embryo consists of a skeleton that is nearly complete and was discovered inside an extremely weathered semi-circular nest that contained 2 perinate (hatchlings or embryos that are close to hatching) skulls that were less than 5cm (50 millimeters) of an unidentified taxon called a dromaeosaurid. One of the skulls was discovered to have parts of the eggshell. Both embryonic oviraptorid as well as skulls from the dromaeosaurid family were described by paleontologist Mark A. Norell and colleagues in 1993. They thought this embryo might have a close relationship to first known Oviraptor as well as evidence the idea that oviraptorids were brooding mammals. The two perinates were later identified as being part of the troodontid Byronosaurus. of the troodontid Byronosaurus.

In the same year 1993, a team of scientists from the paleontological research project at the Mongolian Academies of Sciences and American Museum of Natural history discovered an adult oviraptorid specimen as well as from the Ukhaa Tolgod locality of the Djadokhta Formation, in a sublocality called Ankylosaur Flats. This specimen was classified with the number IGM 100/979. It is the skeleton of a partial piece, which includes bones and partial limbs, however missing the skull neck, head and tail. It was discovered in a nesting position on top of an egg elongatoolithid nest with crouching forelimbs folded and folded hindlimbs. Like the embryonic specimen IGM 100/979 was believed to be an oviraptorid that was not identified and closely similar to Oviraptor. The specimen quickly gained fame and named by the name of “Big Mama” by The New York Times press. A bigger and more complete specimen, identified as IGM 100/978, was discovered in 1994 as well in the Ankylosaur Flats Sublocality in the United States Museum of the Mongolian Academies of Sciences field trips. The specimen was discovered as an individual that was not associated with eggs. It appears as a near entire skull as well as the majority of the postcranial parts. The specimen was initially classified as a specimen of Oviraptor.

In 1995 the Mongolian Academy of Sciences-American Museum of Natural history expedition found a second nesting oviraptorid species in The Ukhaa Tolgod locality, in an area known as Camel’s Humps, at the Death Row sublocality. The new specimen was labelled to be IGM 100/1004 and was dubbed “Big Auntie”. The excavation took many days of labor and a crew of filmers recorded some of the excavation’s progress via video documentaries and photography. The team of experts needed to take away certain sediments that were surrounding the fossil because the terrain was uneven and the specimen is too bulky to be moved towards the mountain. Since the majority of fossils from that Ukhaa Tolgod locality have a fairly good conservation and exposed, their absence of nests in the area smacks against the possibility of this particular sublocation as an oviraptorid nesting location. IGM 100/1004 is somewhat larger than 100/979. they preserve the whole cervical sequence, with the exclusion of the atlas, the axis, dorsal vertebrae that have Thoracic ribs and the sacral vertebrae, and limbs.

In 2001, paleontologists James M. Clark, Mark A. Norell and Rinchen Barsbold christened this new species and species Citipati of the osmolskae family that was derived from the well-known as holotype IGM 100/978. They also compared the to specimens IGM 100/971 (embryo) with 100/979 (“Big Mama”). The name that is used for the generic species, Citipati, is formed from the Sanskrit words citi (meaning funeral pyre) and pati (meaning lord) in reference to the god of cemeteries in the Tibetan Buddhism folklore, Citipati is usually represented as being a humanoid skull. The particular designation, osmolskae, is in tribute to the famous Polish paleontologist Halszka Osmolska, whose work was a major study of Mongolian theropods.

Citipati was an oviraptorid that was large-bodied and the biggest specimens being emu-sized. It is estimated at 2.9 meters (9.5 feet) in length and an estimated weight of 75-83 kilograms (165-183 lbs) and was among the biggest known oviraptorosaurs prior to the discovery of Gigantoraptor. Based on their humeral lengths IGM 100/1004 was approximately 11% more that IGM 100/979. Similar to other oviraptorids Citipati was unusually long in its neck and a shorter tail when compared to theropods of other species. There is a distinct pygostyle, as well as brooding poses in the specimens of Citipati suggest the presence of large tail and wing feathers as well as the plumage. The oviraptorosaurs and other oviraptorids are also believed to have feathers.