When it Lived : Early Cretaceous, 125 million years ago

Baryonyx (/,baeri’anIksor) is the name given to a species belonging to theropod dinosaurs which lived in the Barremian stage of the Early Cretaceous period, about 130-125 million years ago. First skeletons were found in 1983 at the Smokejack Clay Pit, of Surrey, England, in sediments from the Weald Clay Formation , and was the holotype specimen for Baryonyx Walkeri, which was named by Palaeontologists Alan J. Charig and Angela C. Milner in 1986. The name Baryonyx, as it is commonly used refers to “heavy claw” and alludes to the massive claw on its first finger. The particular name, walkeri, is a reference to the person who discovered it an amateur fossil hunter William J. Walker. Holotypes are among in the top ten complete skeletons of theropods of the UK (and is still one of the complete specimens from the spinosaurid) and its discovery was the subject of media attention. The specimens that were later found in different parts within the United Kingdom and Iberia have been added to the Genus.

The Holotype specimen, which might not be fully grown, was thought to have been between 7.5 to 10 meters (25 or 33 feet) in length and to weigh at between 1.2 and 1.7 meters (1.3 as well as 1.9 shorter tons, 1.2 as well as 1.7 large tons). Baryonyx had a long short and narrow snout which was compared to the grharial. The snout’s top extended towards its sides in the shape of an oblong. The upper jaw was an opening that matched its lower jaw (which was curved up in the exact region). It also had a triangular crest at the top of the nasal bone. Baryonyx was a plethora of conical, finely serrated teeth, with its largest teeth located in the front. The neck was an S-shape. The neural vertebrae of its dorsal spine were taller from forward to the back. The lengthened neural spines indicate that it might have been shaped with a hump or ridge across its back. It was a robust forelimb and a first-finger claw measuring 30 centimetres (12 inches) long.

Today, it is recognized as a part of the family of Spinosauridae Baryonyx’s affinities with Spinosauridae were unknown when it was first discovered. A few researchers have suggested Suchosaurus the cultridens species is a senior synonym (being an earlier name) and that Suchomimus Tenerensis is part of the same genus. Later researchers have decided to keep them distinct. Baryonyx was the very first theropod dinosaur to be proven to be piscivorous (fish-eating) according to evidence provided by the presence of fish scales in stomach area of the Holotype specimen. It might also have been a proponent of prey larger in size as well as an scavenger since there were bones from Iguanodontids in their juvenile stages. The animal would have taken and processed its prey using its forelimbs as well as huge claws. Baryonyx could have had semiaquatic characteristics and was a co-habitant with theropods, ornithopod, and sauropod dinosaurs, along with turtles, pterosaurs and fishes in a fluvial habitat.

In the beginning of January 1983, the British professional plumber, and amateur fossil hunter William J. Walker explored the Smokejacks Pit, a clay pit located in the Weald Clay Formation near Ockley in Surrey, England. He stumbled across a rock in which the claw was large however, after putting it together at home it was discovered that the top of the claw had gone missing. Walker went back to the exact spot in the pit several weeks later and discovered the missing portion after searching for over an hour. The excavation also revealed the phalanx bone, as well as part of an rib. Walker’s son-inlaw later took this claw into the Natural History Museum of London and it was examined by British Palaeontologists Alan J. Charig and Angela C. Milner, who recognized it as belonging to theropod dinosaurs. Palaeontologists discovered more bone fragments on the site in February, however the whole skeleton was not able to be retrieved until May and June because of the weather conditions in the pit. A group consisting of eight museum employees and some volunteers excavated two tonnes (2.2 short tonsand 2.0 lengthy tons) from rock matrix into 54 blocks during a three-week period. Walker offered the claw for donation to the museum along with Ockley Brick Company donated the rest of the skeleton. Ockley Brick Company (owners of the pit) donated the remainder of the skeleton, and also provided the necessary equipment. The site had been searched for over two centuries, but no similar remains had been discovered prior to.

The majority of bones discovered were covered in siltstone nuclei, which were surrounded by fine silt and sand, and the rest were covered with clay. Bones were broken, and scattered across a 5-by-2-meter (16.4-by-6.6-foot) area, however the majority were in their normal places. The location of some bones was altered by a bulldozer and certain bones were fractured by mechanical devices before they were retrieved. The process of preparing the specimen was a challenge due to the hardness in the siltstone matrix as well as that it contained siderite. acid preparation was tried but the majority part of the matrix had to be removed by mechanical. It took six years of nearly continuous preparation to extract the bones from the rock. In the endof the process, dental instruments and air mallets were required to be examined using microscope. The specimen comprises around 65 percent of bone skeleton and comprises of skull bones that are partially encased comprising the premaxillae (first bone of upper jaw) and left maxillae (second bone of the upper jaw) and both nasal bones as well as the left lacrimal. the left prefrontal, the left postorbital; the skullcase which includes the occiput, as well as each of the dentaries (the front jaw bones) as well as various bones found at the lower jaw’s back teeth cervical (neck) as well as dorsal (back) and the caudal (tail) vertebrae as well as ribs and two the scapulae (shoulder blades) and coracoids. the humeri (upper arms bones) as well as both the left and the ulna (lower bone of the arm) fingers, as well as the unguals (claw bones) and hip bones. the upper part of the left fibula (thigh bone) and the lower part of the right the right fibula (of the lower leg) and foot bones that include an ungual. The original specimen’s identification reference number for the specimen was BMNH R9951 however it was later changed to NHMUK V.P. R9951.

in 1986 Charig as well as Milner named an entirely new species and genus with the skeleton being a the holotype specimen: Baryonyx walkeri. The generic name comes from the earliest Greek barus (barys) is “heavy” or “strong” and onux (onyx) is a reference to “claw” or “talon”. The particular name honors Walker for locating the fossil. In the early days, the authors were not sure whether the large claw belonged either to the hand, or feet (as in dromaeosaurs that it was later believed as). The dinosaur was presented in the previous year at the course of an event on the systematic study of dinosaurs held located in Drumheller, Canada. Because of ongoing research regarding the bone (70 percent were being completed in the year of their discovery) they deemed their report preliminary, as they promised to provide a thorough explanation at a later time. Baryonyx was the largest Early Cretaceous theropod found anywhere in the world at the time. Prior to discovering Baryonyx the most notable theropod found from the United Kingdom was Eustreptospondylus in 1871. In the interview of 1986, Charig described Baryonyx “the best find of the century” in Europe. The Baryonyx fossil was extensively reported in international media and was dubbed “Claws” by journalists punning on the title of the film Jaws. The discovery of the skeleton was the topic of an 1987 BBC documentary and a model of the skeleton has been displayed on display at the Natural History Museum in London. It was in 1997 that Charig along with Milner published an essay that describes the holotype skeleton’s details. The holotype specimen is the only known spinosaurid skeleton. 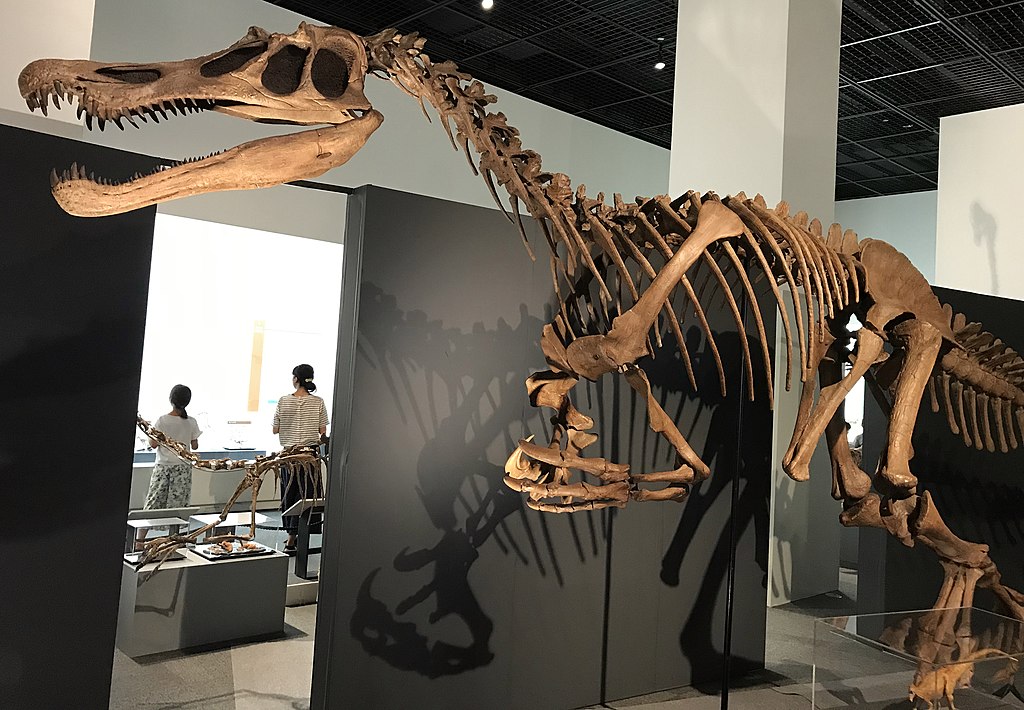 Fossils found in other regions in the UK and Iberia predominantly isolated, have since been assigned to Baryonyx or other similar species. Bones and teeth that have been isolated found on the Isle of Wight, including hand bones that were reported in 1998 as well as a vertebra described by British Palaeontologists Steve Hutt and Penny Newbery in 2004 were attributed to the genus. A maxilla fragment found in La Rioja, Spain, was identified as Baryonyx by Spanish Palaeontologists Luis I. Viera and Jose Angel Torres in 1995 (although the American Palaeontologist Thomas R. Holtz and colleagues suggested that it might be related to Suchomimus during 2004). The year 1999 saw the discovery of a postorbital tooth, squamosal remains as well as metacarpals (hand bones) as well as a phalanx discovered in the Salas de los Infantes deposit in Burgos Province, Spain, were attributed to an unadulterated Baryonyx (though certain elements are not included in the Holotype) according to the Spanish Palaeontologist Carolina Fuentes Vidarte and colleagues. Dinosaur tracks in the vicinity of Burgos are also believed to be part of Baryonyx or an equivalent theropod.

In 2011, there was a sample (ML1190) was discovered in the Papo Seco Formation in Boca do Chapim, Portugal, with a dentary fragment, teeth and vertebrae, ribs the hip bone, a scapula and a phalanx, was believed to be Baryonyx according to the Portuguese Palaeontologist Octavio Mateus and colleagues, the most complete Iberian remains of the animal. The skeletal components of this specimen are found in the more comprehensive Holotype (which was also of the same dimensions) however, with the exception of those vertebrae in the middle of neck. In the year 2018, British Palaeontologist Thomas M. S. Arden and colleagues determined that the Portuguese Skeletal remains did not belong to Baryonyx because the front of its dentary bone wasn’t heavily twisted. Other spinosaurid remains from Iberia might belong to taxa that are not Baryonyx and include Vallibonavenatrix of Morella.

In 2021, British Palaeontologist Chris T. Barker and colleagues presented two spinosaurid genera that were discovered in the Wessex Formation of the Isle of Wight, Ceratosuchops and Riparovenator (the latter being named R. milnerae to honor Milner for her contribution to research on spinosaurids) They also noted that spinosaurid materials from the area that was previously assigned to the present Baryonyx could be part of other taxa in lieu. The specimens were previously identified as belonging to Baryonyx in a abstract for a conference. Barker and colleagues wrote their belief that recognition of Wessex Formation samples as brand new genera makes the existence of Baryonyx in the area ambiguous and the majority of previously isolated material assigned to that Wealden Supergroup is therefore unclear. The authors also discovered an Portuguese material ML 1190 to be part of Baryonyx and support its initial designation to the Genus.

Baryonyx is thought to have measured between 7.5 to 10 meters (25 and 33 feet) in length, 2.5 m (8.2 ft) in height at the hips and to weigh at a weight of between 1.2 and 1.9 tonnes (1.3 to 2.1 shorter tons, 1.2 as well as 1.9 length tons). The fact that the elements of the vertebral column and the skull in the B. Walkeri holotype specimen (NHM R9951) don’t appear to have been co-ossified (fused) indicates that the animal was not fully developed and that the mature animal might have been much bigger (as is the case with many others spinosaurids). However the specimen’s sternum that is fused suggests that it might be mature.