When it Lived : Late Cretaceous, 85-80 million years ago

Bagaceratops (meaning “small-horned face”) is a genus belonging to the ceratopsian dinosaurs that was found in the current Barun Goyot Formation as well as in the Djadochta Formation, during the Late Cretaceous. While it was a late emergence during the time of the dinosaurs Bagaceratops featured a rather primitive body and maintained the tiny body size typical of the early ceratopsians.

The first evidence of Bagaceratops were found in the Gobi Desert in the 1970s by a joint team consisting from Mongolian as well as Polish scientists. It was first described in 1975 by the two expedition’s most prominent scientist, Teresa Maryanska and Halszka Osmolska. Many from these Bagaceratops specimens are located at Polish’s Paleobiological Institute in Warsaw. The Holotype is ZPAL MgD/126, a medium-sized skull found in the Hermiin Tsav locality of the Barun Goyot Formation, during the Campanian phase that was part of the Late Cretaceous. The general name, Bagaceratops is “small-horned face” and is an abbreviation of the Mongolian Baga meaning “small”; Greek ceratops means “horn face”. The only species of its kind, B. rozhdestvenskyi, was named in honour of Russian paleontologist Anatoly Konstantinovich Rozohdestvensky.

Bagaceratops is recognized by five complete and 20 partial cranias, with the longest of which is 17 centimeters long. The skulls span the stages of life of the animal The smallest skull is just 4.7 centimeters long. Therefore, the growth stages are known. The smaller skulls of the juveniles were roughly equal in length to the golf ball. Only small fragments from Bagaceratops Post-cranial anatomies have been identified. Juvenile remains, initially being tentatively identified as Protoceratops Kozlowskii, but later changed to Breviceratops Kozlowskii in 1990, are now thought to be young Bagaceratops. Paul Sereno in 2000 explained this by assuming that the young Breviceratops could develop into mature Bagaceratops. 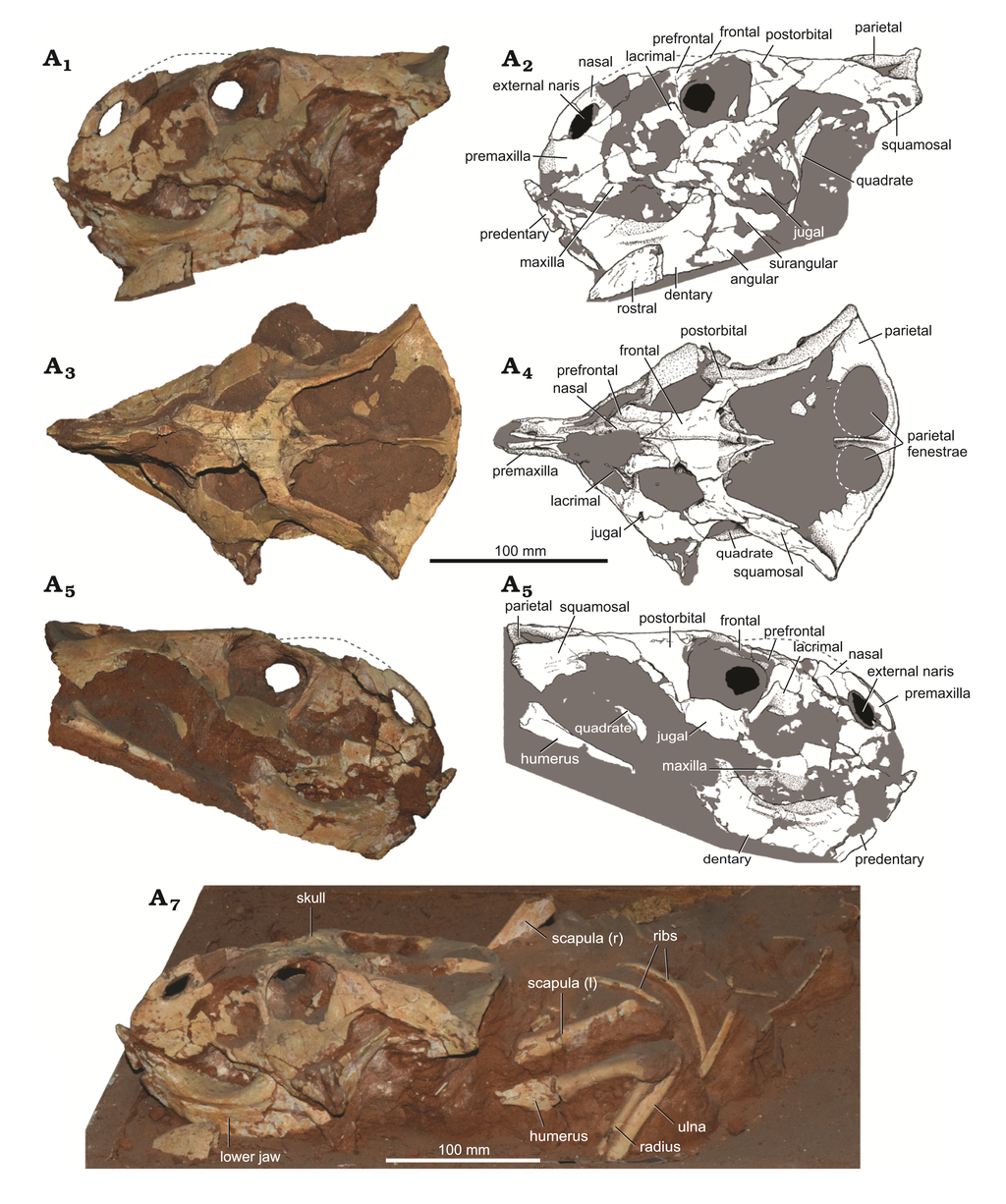 A study of the causes of the observed differences in morphology as well as size of skulls from Bagaceratops was carried out by Lukasz Czepinski in the year 2019 and also considered that the specific species Gobiceratops minutus Lamaceratops tereschenkoi, Platyceratops tatarinovi and Magnirostris dodsoni as potential development stages for B. Rozhdestvenskyi, and thus junior synonyms. While the genus has remained for a lengthy period without postcranial remains an early skeleton from Bagaceratops was found in 2007 as well as located in the Hermiin Tsav locality of the Barun Goyot Formation, and identified by Bitnara K. Kim and coworkers in the year the year. The specimen was classified as KID196, and comprises an incomplete specimen. In the year 2020, Czepinski presented fresh specimens from Bagaceratops along with Protoceratops that were found in the Uuden Sair and Zamyn Khond localities of the Barun Goyot Formation, or Djadochta Formation, and evaluated the implications of these samples in the context of the correlation between fossil sites in the former formation. He analyzed one of the specimens, specifically MPC-D 100/551B as the possibility of proving an anagenetic shift to Protoceratops andrewsi Bagaceratops Rozhdestvenskyi.

Bagaceratops was able to grow to an adult size of around 1 one metre (3.3 feet) in length, 50 centimetres (1.6 feet) tall and weighed in at around 22 kilograms (50 pounds). It had a less frill (which did not have Fenestrae) and had just ten grinding teeth per jaw, as well as a more triangular skulls than its closest relative, Protoceratops.

Bagaceratops evolved later, but it has traits that are more primitive than its predecessor. The two dinosaurs were very alike in that they both had beaks but without brow horns and a tiny horn-like prominence at the top of the head.

Bagaceratops was part of the Ceratopsia group of herbivorous dinosaurs that had beaks like parrots, which flourished across North America and Asia during the Cretaceous Period, which ended around 65 million years ago.