When it Lived : Late Cretaceous, 95-70 million years ago

Archaeornithomimus (meaning “ancient bird mimic”) is a genus that belongs to ornithomimosaurian theropod dinosaurs that was found within Asia throughout the Late Cretaceous period, around 96 million years ago within the Iren Dabasu Formation. 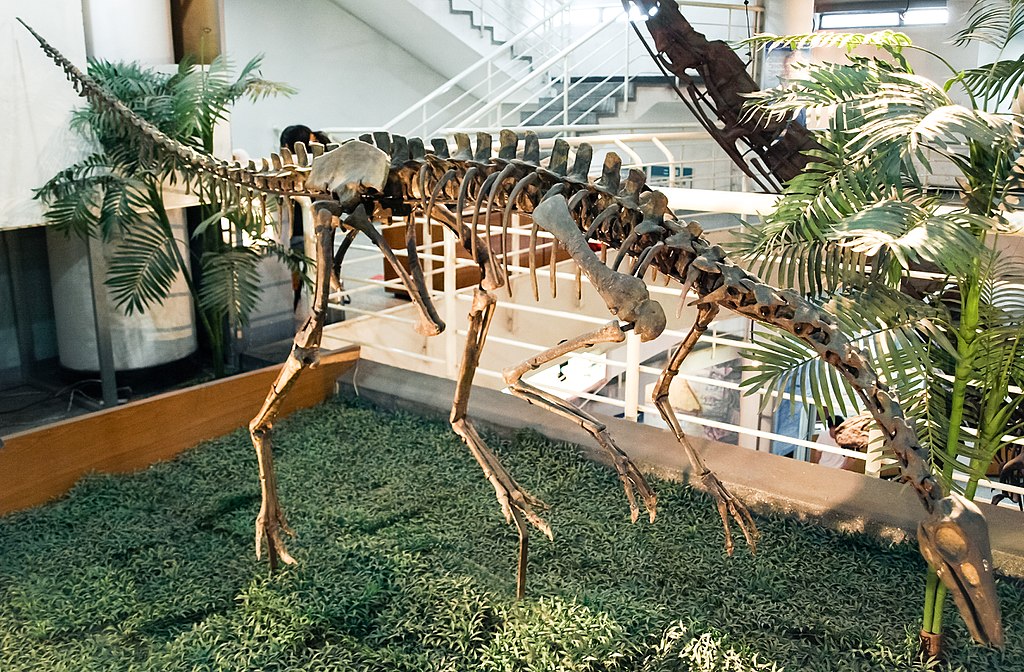 In 1923, on the American Museum of Natural History expedition led by Roy Chapman Andrews to Inner Mongolia, Peter Kaisen discovered many theropod remains within three quarry sites. They comprise mainly disarticulated remains of various individuals, and the material from the skull and lower jaws are missing. They were identified and explained by Charles Whitney Gilmore in 1933 as a new type of Ornithomimus, called Ornithomimus Asiaticus. The name is a reference to the Asian origins. The species was incorporated into the archaeornithomimus new genus in 1972 by Dale Russell in 1972, making Archaeornithomimus asianus the primary species in the genus. The generic name blends that of Ornithomimus with the Greek arkhaios (archaios), “ancient” in reference to the fact that Russell believes that the sediments that Archaeornithomimus was discovered date back to the Cenomanian-Turonian age approximately 9 million years old. This made archaeornithomimus among the oldest ornithomimids that were discovered in the present. Gilmore was not assigned an holotype specimen until 1990, David Smith and Peter Galton in the first complete review of the fossils chose the one of the specimens, AMNH 6565, which is a foot to be the type. The fossils were discovered inside the Iren Dabasu Formation, which is dated back to the Cenomanian time period, approximately 95.8 +/- 6.2 million years ago.

Foot bones discovered inside the Early Cretaceous Arundel Formation of Maryland were identified to Othniel Charles Marsh Allosaurus medius in 1888. In 1911, Richard Swann Lull named these as Dryptosaurus new species named Dryptosaurus grandis. In 1920, Gilmore changed the name to a new Ornithomimus species. But, since Ornithomimus grandis was already in existence, he changed the species as Ornithomimus affinis. In 1972, Dale Russell renamed them as another archaeornithomimus species: Archaeornithomi affinis. However, in the year 1990 Smith and Galton decided that the remains weren’t ornithomimosaurian, but rather from an other smaller theropod.

In 1995, a rumored third Archaeornithomimus species was identified in the name of Lev A. Nesov: Archaeornithomimus Bissektensis based on the holotype N 479/12457 which is a metatarsals and femur of one of the juveniles, which was found within the Bissekty Formation of Uzbekistan, which dates from the Turonian Coniacian. The connection of A. bissektensis is generally uncertain or not discussed.

Archaeornithomimus was a medium-sized ornithomimosaur that measured 3.4 millimeters (11 feet) in length and weighing between 45 and 91 kilograms (99 to 201 lbs). The evidence in other ornithomimosaurian relatives suggests the possibility that Archaeornithomimus had feathers on the beast that had a ratite-like plumage and was equipped with an elongated beak.

The hindlimbs were built well. The third metatarsal did not have a pinched position at the upper part, so the foot wasn’t an arctometatarsalian. The cervical vertebrae appear to be highly pneumatized and have very intricate internal chambers that run across the neural arches as well as the central region (body inside the vertebra) that indicate the existence of air sacs within the cervical area. The anterior dorsal as well as certain caudal vertebrae show a level of pneumacity. However the sacral vertebrae are pneumatic. In a study in 2001 carried out by Bruce Rothschild and other paleontologists 229 foot bones linked to the Archaeornithomimus were analyzed for evidence of stress fractures, however none was found.